Swamy wrote a letter to PM Narendra Modi expressing his deep concern about the deliberate delay of prosecution of Chidambaram.

This letter played a crucial role on 26th November’s hearing before the 2G court resulting in ‘the Sanction to CBI ‘ to prosecute former Finance Minister Chidambaram in Aircel-Maxis case.

Swamy is of the opinion that certain officials in finance ministry are trying to discredit the investigations that are being carried out against Chidambaram and his family in the Aircel Maxis & Inx media cases.

A charge sheet on Karti has already been filed by ED and is in the process file a supplement charge sheet against P.Chidambaram too. It was no easy feat for honest ED officers to achieve this.

In October 2017, a conspiracy was hatched at the highest bureaucratic levels in finance ministry to save Chidambaram by constraining the investigations and discrediting the investors.

In their last-ditch effort to stop ED from filing charge sheets against Chidambaram, in September 2018 a conspiracy was hatched this time against investigating Officer Rajeshwar Singh by conducting enquiries against him.

Due to non-co-operation from finance ministry officials led by Hasmukh Adhia, no charge sheet has been filed by CBI or ED till date. It will be a major embarrassment to govt & party in the run-up to the general elections if the Aircel – Maxis & INX media case fails.

Due to non-approval of its request for Sanction for Prosecution of Chidambaram’s co-accused, CBI too is facing embarrassment in the court.

There is a cabal in the govt that is working against the public interest to save Chidambaram and hamper the trial process and repeat the same mistakes that were committed in 2G case.

Swamy requested the PM to thwart the conspiracy and ensure that justice is delivered in this fight against black money. 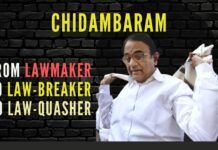 IT was aware 13 years ago of Congress party’s illegal fund...

#BringBackBillions Part 2 – How Marcos made his billions