How I came about writing this book is described below. An astute reader can make his/ her own judgments on why Demo was done. To understand this, we have to go back a few years…

Do you know that to catch one of the world’s biggest Money Launderers (ML) in the world, the Australian taxpayer risked $1 million dollars and gave it to the said ML and set up an elaborate sting to catch them in the act? In the course of the way, the sleuths ran into human mules, then couriers to brokers to middlemen – an elaborate thriving network being run from somewhere offshore[1].

How did Memon twins, Altaf Sattar Khanani and his brother Mohammand Javed Khanani manage to become one of the world’s biggest money launderers? Did they work in tandem with Dawood Ibrahim and his D-Company? As money moved seamlessly from Sydney to Dubai to Birmingham to Guernsey (one of the tax havens), a network running to hundreds were faithfully passing money through their hands.

The twins formed Khanani and Kalia International (KKI), a currency trading organization, in 1984. By the 1990s, more foreign currency was passing through KKI than the banking system of Pakistan! By 1997 many governments were looking into KKI’s network but the twins were close to the body politic of Pakistan: civil servants, politicians and army generals. So how is all this related to my book? Wait, I am getting there…

The sting operation resulted in netting Altaf Khanani in Panama. Since then, he has been cooling his heels in a prison in the United States, serving a 68-month prison sentence for money laundering.

Demonetisation happened on November 8, 2016. Was this in response to a decision by Pakistan to increasing printing fake currency by 300%? In fact, having given a contract to KKI to do the same, did the ISI renege on paying KKI (Javed) when they realized that they were sitting on worthless piles of cash[2]? And to ensure Javed’s silence, did he accidentally push himself from the roof of an under-construction building[3]?

With the unloading of fake currency in Kochi in 2011 to the abovementioned incidents, I had two ends of a story and all I did was connect the dots. Interestingly, a video clip of my book release in the Constitution Club of India on December 26th, 2019 has gone viral and the e-Book (you can buy this today at Amazon for Rs.129) is available at Amazon.in. Happy reading! 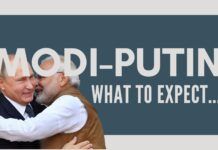 What should one expect from the Modi-Putin meeting other than Jhappi diplomacy? Why is Ilhan Omar silent on racist attacks on a Buddhist in Sialkot & on Jews celebrating Chanukah?