The Sultanpur police in Uttar Pradesh have arrested Irfan, owner of a tent house along with his two brothers Sadan and Shehzad on the charges of murder of a woman and her 21-year-old daughter. The mother-daughter duo was found murdered in their house on June 29. Police also recovered a machete used in the murder.

Sultanpur Superintendent of Police (SP), Somen Barma said that Shakuntala, whose husband is a vegetable vendor, was passing through a rough phase as she lacked the money to fulfill her daily needs.

Barma said, “Irfan became friendly with the woman and started spending a lot of money on her. He would take her for the ride in his luxury car. Then he met her 21-year-old daughter and asked the mother to let her be with him. The daughter turned down his proposal and this strained the relationship between the mother and Irfan.”

“I tried to persuade Shakuntala to get me married to Vijay Laxmi and even agreed to pay for her studies and pamper her with all the luxuries, but she was defiant,” Irfan told police during the interrogation.

“Upset at the rejection, I demanded all my money back from Shakuntala which led to a brawl. In a fit of rage, I took out the machete and slit her neck. Thereafter, we held Vijay Laxmi who began screaming and killed her, too, before we fled,” Irfan added.

Irfan’s call details revealed that more than 500 calls were exchanged between him and Shakuntala. 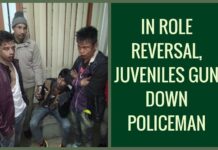