In a recent Judgment, the Andhra Pradesh High Court came down heavily on the illegal encroachments on the water bodies and its buffer zone near Thondavada, Tirupathi. In a case, filed by Thumma Omkar (WP No.15511 OF 2021) on 30-07-2021 Versus the State of Andhra Pradesh, the judgment was passed on Dec 29, 2021, by Honorable Judge Sri Venkata Ramana.

The learned court observed that there are illegal encroachments in the water body at the Village Thondawada, near Tirupathi. It is to be noted that the administration and the Islamic university both accepted that they encroached on the water body and its buffer zone. Yet High Court order was required to remind the authorities to perform their duties in removing these encroachments. It appears the authorities are willing to follow the legal process, but the political intervention seems to be the biggest hurdle in enforcing the law. In this landmark Judgment, the learned court appreciated the effort and intention of Thumma Omkar for approaching the Court to protect the water bodies. The order also opined that the administration should not wait for the citizens to fight for these lands, but the officers must enforce the law accordingly on the illegal constructions/ encroachments. The order said, “When such is the nature of the lands which are otherwise a part of the poramboke of the concerned villages namely Chandragiri and Thondawada, the official respondents are under a duty and obligation to get these encroachments removed at once. In fact, when the duty is cast on them, they are not expected to wait for a call from the citizenry like the petitioners. The stand of the petitioners should necessarily be appreciated in this background who did alert the official respondents reminding them of their duty and responsibility to protect these lands from being encroached and grabbed.”

If we observe the timeline, there were several orders passed in the past by the authorities against Heera Islamic University. However, due to various political reasons, none of them appeared to have been implemented. There is a rumor in Tirupathi, that key politicians belonging to all political parties were given money to suppress the issue. Given the Court order to remove the encroachments from the water body and the buffer zone, locals have to wait and see if the authorities would act to remove these encroachments. Due to various reasons common public already lost faith in the administrative departments. Now it is the golden opportunity for the authorities to regain the faith of the public by upholding the law. Their actions will decide if the locals can believe in the authorities. Otherwise, this will send a message that the authorities are simply a toy in the hands of the politicians.

The learned court also directed that any water body violation is not to be tolerated and must be actioned promptly, the order said, “If any new structures have come up in the above lands during the pendency of this writ petition, they shall be summarily removed. Any further structures in the aforesaid lands shall not be permitted to raise. Raising any structures on the above lands is restrained and barred. In spite of this order, if any structures are raised upon encroaching, the official respondents are at liberty and empowered to remove them, without issuing prior notice.” The Court order is very clear and did not entertain the encroachments. Heera Islamic University always attracted negative publicity not because they constructed the university, but because they did not care to respect the law of the land and did not care to respect the Hindu religious sentiments[1]. There were several news reports in the past linking Nowheera Shaik with money laundering/ Hawala and terror links[2]. News reports also suggest that she faced interrogation from the national agencies on the above-said issues[3]. The Fact-Finding Committee, headed by Justice S Parvatha Rao, Former High Court judge, AP, T S Rao, IPS (Rtd), Former DGP of AP, Dr. C Umamaheswara Rao, IAS (Rtd) in 2013 visited Tirupathi and recorded several violations. This committee also highlighted the danger posed by this university to the sanctity of Tirumala and possible terror links[4]. Since then the authorities have issued orders one after another on the violations without much action on the ground. On the other hand, the Islamic University group seems to continue or spread their illegal encroachments and constructions.

It is to be noted that the fact-finding committee also observed that the Islamic University was constructed very close to the remains of Lord Venkateswara or Thimmappa temple. Locals say that the lands that are encroached by Heera Islamic University and several others belong to the Thimmappa Temple. Peculiarly TTD or the state endowment department or the Revenue department did not take the initiative to unearth the land records of the Thimmappa temple. It is the responsibility of the endowment department or the government to protect these sites, but that is not happening. Hindus like Thumma Omkar are fighting at the individual level to protect these temple lands. This clearly shows the materialistic nature or attitude of the politicians and the endowment department. Their interest lies in the wealth of the temples, and they seemed to be careless in protecting the properties of Hindu temples.

Hindus consider Tirumala Venkateswara as Kaliyuga Pratyaksha Daivam. Many Hindus from various places across the world strive to spend time at the feet of the Lord. Not only in Tirumala but in Tirupati also there are several Hindu temples. During the Covid Pandemic, Hindus of Tirupati and Tirumala understood one aspect very clearly. It is because of Lord Venkateswara, many Hindus are visiting Tirupati and Tirumala. Based on this pilgrimage many businesses are prospering in and around Tirupathi. If and when for whatever reasons Hindus stop going to Tirupathi, then the money will stop. Therefore, as long as the sanctity of the Hindu temples is protected Hindus will visit them. If these temples and the towns lose their sanctity or glory due to the political interventions, or due to the misdeeds of the endowment department, or due to the adamant nature of the conquering ideologies that are eager to destroy the sanctity of Hindu pilgrimage sites, then the money will stop and the businesses are to face this wrath. Without, Lord Venkateswara Tirumala and Tirupathi will become a body without Prana. This will eventually lead to the decline of the indigenous Hindu population in the region. Perhaps it is this the politicians and the conquering Abrahamic ideologies want. It is because of this there are constant attacks on the sanctity of Tirupathi and Tirumala.

In the past, Hindus were not hesitant to give their lives to protect the sanctity of Tirumala from the attacks of Europeans and Islamists. Believing in democracy Hindus let their guard down. Now the administration must enforce the Court orders, which will help in upkeeping the faith in the democratic process. If not, Hindus have to understand that democracy is failing them. Hindus must also understand that the politicians and the Abrahamic ideologies are taking advantage of the peaceful nature of Hindus.

[1] As per Hindu Aagama Sastra, there should not be any other construction within the radius of 15 kilometres from the Govinda Raja Swamy Temple – Mar 16, 2018, PGurus.com 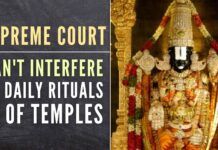 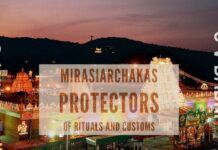 Part 6 – Why is TTD against MirasiArchakas? The Protectors of Rituals and Customs