[dropcap color=”#008040″ boxed=”yes” boxed_radius=”8px” class=”” id=””]N[/dropcap]ine days after terrorists believed to be from Pakistan attacked an Indian Air Force base, Defence Minister Manohar Parrikar on Monday said pain must be inflicted on those who hurt India.

Addressing a seminar here ahead of Army Day on January 15, the minister talked about the “enemy”, saying “unless pain can be transmitted to them, they will always end up giving pain to us. I am pained when my soldier dies”.

But Parrikar stressed that this was his personal view and should not be taken as the view of the Narendra Modi government.

“I am of this opinion… and it should not be taken as the government thinking,” he said.

In one of the strongest statements following the attack, the defence minister said the time, manner and place of the response will be decided by India.

He, however, refrained from naming Pakistan, and referred to “individuals and organisations” that hurt India.

“How, when and place (to inflict pain) should be of your choice,” he said.

“But if someone is harming the country, I think the particular individual or organisation should receive the pain of such activity.”

The seminar “Indigenisation of the Indian Army in a Futuristic Context” was held at the Manekshaw Centre in Delhi cantonment.

Parrikar’s comments came in the wake of the January 2 terrorist attack on the IAF base at Pathankot in Punjab which left seven security personnel dead.

Security forces killed all six terrorists, believed to be Pakistanis, who sneaked into Punjab.

Asked about his comments later, the minister said it was a “basic principle”.

“As long as we don’t give pain, nothing will happen. History tells that those who make the damage, if they don’t realize what pain they inflict, they don’t change.”

The minister said soldiers should aim at neutralizing the enemy and “our own casualties should be minimal”.

“The aim should be taking life, not giving. Sacrifice is respected… but what the nation needs is that you neutralise your enemy, the nation’s enemy,” he added.

India says it has provided “actionable evidence” to Pakistan to act against those who masterminded the Pathankot attack.

India has named Maulana Masood Azhar, chief of banned terror outfit Jaish-e-Muhammad, as well as the organisation itself and others as being responsible for the Pathankot attack in evidence shared by National Security Advisor Ajit Doval with his Pakistani counterpart Nasir Janjua, according to sources here. 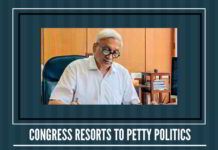 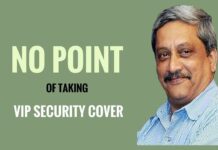