The Confederation of All India Traders (CAIT) on Saturday hailed Commerce Minister Piyush Goyal for urging Indian Corporates to prioritize national interest above self-interest. For the first time after India’s Independence, an elected Government representative has talked about inclusive growth of big and small businesses and this bodes very well for the growth of India, said Praveen Khandelwal, National Secretary General, CAIT. The CAIT National President B C Bhartia said that there is no doubt Indian Corporate houses have contributed to the growth of India but there are 80 million small and medium traders whose survival and well-being has been completely ignored by these corporate houses who have colluded with multinational giants to plunder India’s retail market and destroy the business ecosystem by twisting it for their own selfish gains.

On Friday, Commerce Minister blasted the non-cooperation, lobbying tricks of big Corporate Houses, especially Tata Group at a seminar organized by the Confederation of Indian Industries (CII) citing their many commercial interests ignoring national interest. “Me, Myself, My company — We all need to go beyond this approach,” said Goyal blasting Tata Group.

Praveen Khandelwal, National Secretary General of CAIT said almost every big and prosperous nation has protected their own businesses and made policies that favour their home-grown companies.

India’s biggest traders’ association CAIT leaders Praveen Khandelwal and B C Bhartia further said that the highly reputed and respected Infosys promoter Narayan Murthy, who is said to be an idol for the young generation has been supporting the illegal activities of Amazon through his company Catamaran ventures. They expressed a sigh of relief that finally good sense has prevailed with Murthy and he has called off the joint venture with Amazon, though only after Supreme Court has declined to stay investigation by the Competition Commission of India. The CAIT leaders further said that they are expecting a similar announcement by Ashok Patni and others who have equity or any direct or indirect relationship that allows control of inventory or control over the end consumer pricing by e-commerce marketplace companies like Amazon or Flipkart.

Fully supporting the speech of Commerce Minister Piyush Goyal, the CAIT leaders said that it is highly unfortunate that the reputed names like Tata are opposing the Government’s draft consumer protection rules for e-commerce which have been proposed to protect the consumers from frivolous e-commerce companies as well as the large Indian and multinational e-commerce marketplace companies. “These companies manipulate end consumer pricing and do predatory/ discriminatory pricing which may be attractive in the short-run but will ultimately be against the interest of consumers. Instead of standing with the Government for the protection of over 140 crore consumers, they are opposing it on frivolous grounds. Their support will enable foreign-funded companies to emerge as the new Avatar of East India Company,” they said.

Praveen Khandelwal, National Secretary General of CAIT said almost every big and prosperous nation has protected their own businesses and made policies that favour their home-grown companies. “Why is there a hue and cry in India if the Government under Prime Minister Modi also is thinking in the same direction? The time has come for all of us to think why India could not create their own force like China who created Alibaba and kept the likes of Amazon away from their nation. It is now high time India must pave the way for inclusive growth and all Government policies must balance both big Corporate Houses as well as small/ medium traders so that there is a level playing field and scope for co-existence,” said the CAIT leaders in a statement supporting Commerce Minister Piyush Goyal. 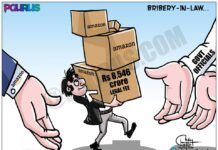