Lawmakers Prem Suwal and Anuradha Thapa Magar of the Nepal Workers and Peasants Party (NWPP) raised slogans against Indian ambassador to Nepal Ranjit Rae, holding him responsible for the almost three-month-old blockade along the India-Nepal border.

“Who is India to interfere in Nepal’s constitution? No one can disintegrate the nation! Send the Indian ambassador back to India,” were some of the slogans that the protesting lawmakers chanted.

The Madhes-based political parties and ethnic groups have been agitating in Nepal’s southern plain for almost three months to press their demands that include re-demarcation of provinces proposed in the country’s new constitution — adopted on September 20, fixing of electoral constituencies on the basis of population and proportional representation in parliament.

The often violent agitation has so far claimed at least 50 lives and blockaded vehicular movement between Nepal and India — resulting in scarcity of essential commodities of daily use including food items, fuel and medicines.

While Nepal blames India for the blockade, New Delhi maintains that the situation is of Kathmandu’s own creation and could be addressed through meaningful dialogue with the Madhes-based protesting groups who want that the new constitution should be amended. 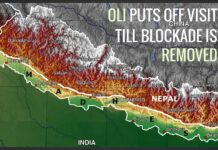