[dropcap color=”#008040″ boxed=”yes” boxed_radius=”8px” class=”” id=””]T[/dropcap]he Japanese Ambassador to India Kenji Hiramatsu said on Monday, Japan has committed about $30 billion investment for the development in Haryana, where there are about 305 Japanese companies operating i.e., the highest in the country.

With the total of 203 Japanese companies operating in Gujarat, it holds the second position after Haryana.
While addressing at the two-day summit ‘Happening Haryana Global Investor Summit’, Hiramatsu said “Our auto sector and other investments have been inspired by the untiring efforts of and support by the Haryana government.”

He said Japan had committed about 30 billion dollars in investments and aid for development. Jhajjar has been identified for setting up a Japanese integrated industrial township.

Keita Muramatsu, president and CEO of Honda Scooters and Motorcycles India, said: “Since last year, we have witnessed unprecedented improvement in the ease of doing business in Haryana due to the state’s new industrial policy. The progress made in Manesar bears testimony to it.” 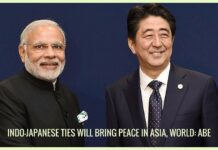