[dropcap color=”#008040″ boxed=”yes” boxed_radius=”8px” class=”” id=””]T[/dropcap]he White House on Wednesday strongly denied that the 400 million U.S. dollars worth of cash airlifted to Iran in January was paid as a ransom for freeing four American prisoners.

The Wall Street Journal reported Wednesday that the U.S. government secretly organized an airlift of the above-mentioned cash to Iran, which coincided with the same day release of four Americans detained by Iran.

Critics of the Iranian nuclear deal, including Republican Senator Tom Cotton, accused the Obama administration of paying a ransom to Iran in order to secure the release of American prisoners in violation of the longstanding U.S. policy against paying ransom to save hostages.

” Republican presidential nominee Donald Trump called the cash deal as a “scandal,” while blasting his Democratic rival and former Secretary of State Hillary Clinton for starting the talks to give 400 million dollars in cash to Iran.

“No, it was not (a ransom). It is against the policy of the United States to pay ransom for hostages,” White House spokesman Josh Earnest told a news briefing.

[dropcap color=”#008040″ boxed=”yes” boxed_radius=”8px” class=”” id=””]E[/dropcap]arnest explained that the money paid actually was Iran’s own money as its payment for procuring U.S. military equipment which was never delivered after the 1979 Iranian revolution.

Iran was seeking over 10 billion dollars from the U.S. over the failed arms deal in the 1970s in an arbitration case heard in The Hague, the Netherlands.

Earnest stressed that the payment actually resolved “a longstanding claim at the Hague that saved the American people potentially billions of dollars.”

” The money was reportedly paid as the first installment of a 1.7 billion-dollar settlement reached last year as part of the Iranian nuclear deal, in which Iran agrees to abandon its nuclear weapons program in exchange for U.S. easing economic sanctions.

[dropcap color=”#008040″ boxed=”yes” boxed_radius=”8px” class=”” id=””]E[/dropcap]arnest said that the cash, in euros, Swiss francs and other foreign currencies, was airlifted to Iran because the U.S. has no banking relationship with Iran.

“There was a conscious, strategic decision that was made on the part of the Obama administration, as we were implementing the deal to prevent Iran from obtaining a nuclear weapon, to resolve other longstanding concerns that we had with Iran,” he said.

Earnest denied a link between the airlift of cash and Iran’s release of American prisoners on the same day.

In response to a question about the worry that the cash could be used by Iran for other purposes, Earnest said the Iranian government “has spent the money largely in the way that we expected that they would,” including investing in infrastructure and paying off its debts. 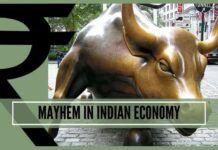 Indian Economy likely to hit as the exchange rate for rupee to reach RS.80/- per USD