The nationalistic people of Jammu province celebrated August 5, 2019, as a day of thanksgiving. On that historic day, the Narendra Modi government read down seditious Article 370 and abrogated discriminatory Article 35A, and integrated the whole of this strategic northern region fully into India. They also hailed the decision of the Union government to segregate Ladakh from J&K and grant it UT status fulfilling the Ladakhi Buddhists’ age-old demand seeking separation from the essentially separatist and fundamentally communal and oppressive Kashmiri leadership. Both these constitutional moves showed Pakistan and China and separatists of all hues in Kashmir the place they deserved.

At the same time, however, concerned citizens of Jammu province expressed regret that the Union government treated Jammu province at par with Kashmir and converted both the regions into a single UT. There were cogent reasons for the people of Jammu province to express regret over the Union government’s utter failure to take cognizance of the bitter and rancorous relations between Jammu province and Kashmir between 1846 and June 2018 and also its mind-boggling decision to maintain the otherwise these two highly disparate and historically, politically, culturally, linguistically, ethnically and economically distinct regions as one political unit and convert the whole remaining J&K also into one UT. Their fundamental argument was that the people of Jammu province, unlike the secessionist Kashmiri political and ruling elite and clergy, had made supreme sacrifices for the cause of the nation in the region; that their watchword and battle-cry all along was total integration into India; and that they consistently fought against the J&K’s separate status as it had only promoted fissiparous tendencies, created what they called a separate republic within the Indian republic on purely religious grounds and sealed the fate of the minority communities in the state or linked their fate with the separatist and communal Kashmiri leadership.

The nature and magnitude of their supreme sacrifices and splendid contributions could be gauged from the fact that many Dogras attained martyrdom from time to time while fighting out the secessionist elements in and outside the political setup. Take, for instance, their sacrifices during the 1952-53 Ek Nissan, Ek Vidhan, and Ek Pradhan movement across Jammu province in which the founder of Jana Sangh Shyama Prasad Mukherjee also participated and laid down his life in Srinagar on June 23, 1953, for the unification of J&K with the rest of the country. The contribution of Dogra women and school and college-going students, including girl students, to the movement, was just superb and remarkable. Almost two dozen nationalistic Dogras were martyred by the brutal state force used by the Nehru government-backed-to-the-hilt Kashmiri leadership to crush the movement in Jammu province. The memory of how the brutal state force martyred at least fourteen nationalistic Dogras during the Ghulam Nabi Azad regime in 2008 in Jammu during the Amarnath land movement is also still too fresh to be forgotten. One can cite any number of instances to establish that the history of the Dogras of Jammu province post-1947 is one of the spectacular contributions to and supreme sacrifices for the nation-making process.

Not just this, it was the valiant Dogra soldiers who strengthened the country’s war machine to the extent that the enemies were, and are, mortally afraid of them. It would be no exaggeration if someone may say that Duggar Pradesh is a land of valiant soldiers, martyrs, and patriots and a land whose people, instead of being rewarded and patronized by the powers-that-be in New Delhi, were punished to the extent that they were rendered unreal and ineffective for all practical purposes in their desperate bids to appease, please and pamper separatist leadership in Kashmir.

But more than that, the Dogras of Jammu province under the able, skillful and effective leadership of Raja Gulab Singh of Jammu founded J&K State on March 9, 1847. That day, Kashmir became part of the Dogra Kingdom, and not vice-versa. Earlier, between 1834 and 1841, the Jammu Dogras had merged Ladakh consisting of Leh, Kargil, Gilgit-Baltistan, Chitral, Hunza, Yasin, Nagar, Ishkoman, Bunzi, Astore, etc, and Kailash Mansravor and Western Tibet with the Dogra Kingdom. The whole credit goes to Maharaja Gulab Singh, his great General Zorawar Singh, and the Dogra soldiers. General Zorawar Singh would have added the whole of Tibet to the Dogra Kingdom, had bad weather and heavy snow not hampered his otherwise highly successful invasion, and had he not fallen from his horse at the battlefield of To-Yo and Tibetan commander Migmar not “hurled a spear killing on December 12, 1941, one of the greatest generals in the subcontinent’s history”, also called the Napoleon of the East.

It must remain a matter of shame that the Nehru government handed over the highly strategic Gilgit-Baltistan, Chitral, Hunza, Yasin, Ishkoman, Nagar, Bunzi and Astore, etc plus other parts of the Dogra Kingdom, including Muzaffarabad, Poonch’s Bagh, Pulandri, Mirpur and Kotli to Pakistan on a platter in 1948 and helped the Islamist invaders convert the whole areas into 100% non-Hindu and non-Sikh and cause displacement of Hindu-Sikh population on a massive scale. These areas constituted J&K State’s nearly 30% land area. The Nehru government not only helped Pakistan occupy these areas but also allowed China to occupy J&K’s 15% land area in Ladakh in 1962.

What does all this show?

All this shows that the Jammu Dogras created a mighty empire at a time when other princely states were felling before the British Imperialists like a house of cards. It also shows that the Jammu Dogras played a remarkable role as far as the process of integration of J&K into India was concerned. No wonder then that the concerned citizens of Jammu province continue to bemoan what the Union government did to them on August 5, 2019. The Narendra Modi government would do well to rectify its decision and grant statehood to Jammu province, which it deserves by any yardstick. To not do so or to continue to treat Jammu province and Ladakh as one political unit invested with UT status would be nothing but a negation of the unique contribution of the Dogras to the nation. As for Kashmir, it has to be maintained as a Chandigarh-like UT as the nation just can’t afford to retransfer the state power to those in Kashmir who subverted the Indian state both from within and outside for 73 years and continue to muddy the Indian waters in Kashmir even today. Similarly, the Union government should accept the December 1991 demand of the internally-displaced Kashmiri Hindus seeking a separate homeland for them within Kashmir invested with UT status. Such a reform scheme, if introduced, alone can break the backbone of separatist forces in the Valley and help the Narendra Modi government achieve the objectives it sought to achieve on August 5, 2019. 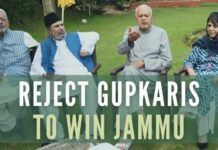 Modi follows in footsteps of Nehru