It is astonishing that none of the politicians and commentators reacting to the demise of former Prime Minister Atal Bihari Vajpayee mentioned that he was perhaps the greatest job creator in Independent India. The figures, by the way, were reached by the erstwhile Planning Commission under the United Progressive Alliance regime—60 million jobs during 1999-2004.

What made the achievement even more impressive was the fact that the average growth rate during the Vajpayee years was a mere 5.8 per cent. Owing to the East Asian crisis of 1997, the economy was moving in a slow motion; it was further hit by the international sanctions imposed in the aftermath of Pokhran II in 1998. It was a testimony to his adept stewardship of the economy that it not only caught pace—clocking 8.2 per cent in the last quarter of Vajpayee rule—but also generated tremendous employment.

Now compare this with the much higher average growth rate during UPA years, almost 2 per cent more than that of Vajpayee’s. But such brisk economic expansion created just over 15 million jobs in 10 years.

Congress leaders have indulged in considerable sophistry and number-crunching to shield their failure, but they couldn’t explain away jobless growth during 2004-14 (The Narendra Modi government’s performance on the employment front is even more dismal). In fact, it would not be an exaggeration to say that the high growth rate during UPA years was because of the reforming fervour shown by Vajpayee (and his predecessors). That the UPA decade came to be known for corruption, policy paralysis, and anti-business attitudes were primarily because of the baneful influence of ‘super-prime minister’ Sonia Gandhi and the circus called the National Advisory Council she surrounded herself with.

Unsurprisingly, the emphasis was on small government, on light regulation, on freeing the animal spirits of entrepreneurship. This boosted the economy and generated employment.

Vajpayee did so well on the economic front primarily because he did… well, so little. Though reasonably educated, he was not of a philosophical bent of mind, so it is unlikely that he imbibed the great theories of Adam Smith, Fredrick Hayek, and Milton Friedman. It seems that, from experience and perhaps by instinct, he came to recognize the perverseness of socialism and statism. He was no Margaret Thatcher or Ronald Reagan but he was surely a most important liberalizer.

More importantly, it was for the first time that the government privatized, rather than disinvested in, PSUs. Regimes before and after Vajpayee’s have sold minority government stakes in state-run companies (and raised more revenue for the exchequer), but offloading most of the equity and handing them over to private companies was far more important and significant. For this announced to the world his belief that the business of government was not business. Disinvestment Minister Arun Shourie eloquently and cogently justified the philosophy and need of privatization.

Indeed it was during Vajpayee years that for the first and the last time the entire gamut of liberalization was provided moral and philosophical justification. P.V. Narasimha Rao and his then finance minister Manmohan Singh did launch liberalization in 1991 but they did it diffidently; the economy was opened up under compulsion rather than by choice. Vajpayee’s government, however, embraced the ideology and principles of economic reforms.

Unsurprisingly, the emphasis was on small government, on light regulation, on freeing the animal spirits of entrepreneurship. This boosted the economy and generated employment.

That he lost in 2004 was not because of economic mismanagement but wrong political calculations. 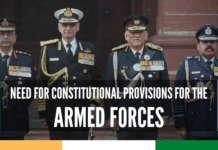 Sajjan Kumar’s conviction should worry the likes of Kamal Nath,...