Writes a note to the PMO & suggests lawyers. Is it ethical?

Finance Minister Arun Jaitley intervened into the Vodafone tax disputes in international forums and suggested appointing a London-based lawyer. In what could be a clear instance of Conflict of interest, Arun Jaitley wrote a letter to the Prime Minister’s Office (PMO) against the decision of Revenue Secretary Hasmukh Adhia and suggested a lawyer Salim Moollan to represent India in the case.

On May 26, Jaitley wrote a letter to Nripendra Mishra suggesting a British lawyer and argued that Government must participate in the London Arbitration forum also…

As he had represented Vodafone and linked companies in its tax battle before mid-2009, Jaitley had recused himself from dealing the files regarding the biggest tax dispute case when he became the Finance Minister in mid-2014. Vodafone case is the biggest tax battle of Income Tax till date. After losing the case, the Government had legislated a retrospective tax law and levied a fine on Vodafone of around Rs.30,000 crores ($4.66 billion) for its controversial takeover in 2006. Like Arun Jaitley, many politician-cum-lawyers represented the telecom company in the high-value case.

Appealing against the Indian Government’s decision, Vodafone approached Netherlands-based Arbitration Forum under the India-Netherlands treaty in mid-2014. Being an old advocate of the telecom company, Jaitley had recused himself from processing the files when he became the Finance Minister.

Now Vodafone’s arbitration case is in the last stages in Netherlands and Government of India is expected to win, say officials in the know. But a few months back Vodafone bowled a googly by approaching a London-based Arbitration Forum under the India-UK treaty. Revenue Secretary Hasmukh Adhia and senior tax officials viewed this as sheer tax abuse by Vodafone and decided to register a protest by not participating in the London Arbitration Forum. Though recused from this issue, Jaitley argued for participation in the London Arbitration forum but Revenue officials stuck to their stand.

On May 26, Jaitley wrote a letter to Nripendra Mishra suggesting a British lawyer and argued that Government must participate in the London Arbitration forum also, ignoring that the Government was already engaged in the Netherlands Arbitration Forum. Along with his one-page letter, Jaitley attached a five-page opinion of an unnamed “former colleague from legal fraternity”.

“A former colleague from the legal fraternity has handed me a note which I am enclosing… There are some which concern the Department of Revenue which I am bringing to the notice of Revenue Secretary for immediate action…. In some cases, we are defaulting in the matter of appointment of arbitrators. This will result in the international forums usurping our power to appoint an arbitrator. We have engaged someone who may not have the adequate stature to create an impact on these arbitrators…,” Jaitley went on in his covering letter to PMO, by attaching an unnamed legal colleague’s letter.

The five-page note attached by Jaitley blames that the style of the conduct of the case by India is not so good and no lawyer from India is engaged. It says that India should also appear in London Arbitration forum and suggests one British lawyer Salim Moollan. The letter also suggests some other British lawyers such as Joe Smouha, Peter Goldsmith, Maurice Mendelson, claiming that these are also reputed, lawyers. Jaitley has underlined several portions of the attached note to PMO.

Having recused himself why is India’s Finance Minister jumping in to suggest something that may be convenient to Vodafone?

It also says that the Revenue Ministry should handover this case to External Affairs Ministry’s legal division. The letter is critical of the stand taken by the bureaucrats of Revenue Department and adds that their stand is wrong.

PMO’s office has not yet taken a decision on this curious move by Finance Minister Arun Jaitley who was not supposed to intervene in the Vodafone case, as he was their lawyer before holding Constitutional posts from mid-2009. The question that needs to be asked is why Jaitley is eager for India to attend London Arbitration Forum while participating in the Netherlands Arbitration forum on the same issue. Here it is clear that Vodafone sensing possible defeat in Netherlands is bench hopping to London. Having recused himself why is India’s Finance Minister jumping in to suggest something that may be convenient to Vodafone? Is it because he was their former Advocate? Isn’t is a case of administrative over-reach?

Another issue of impropriety by Jaitley is why he is entertaining and forwarding the suggestions of an “unnamed former colleague” to the Prime Minister? Jaitley should have named the friend from the legal fraternity while considering unsolicited opinions in such high-value tax cases. Arun Jaitley needs to answer for his meddling into the Vodafone tax case, in which he is not supposed to intervene. It is bad enough that the same set of people are found to be in the Cabinet, Cricket associations and in the Supreme Court. This has to stop.
Note:
1. The conversion rate used in this article is 1 USD = 64.68 Rupees.
2. Text in Blue points to additional data on the topic. 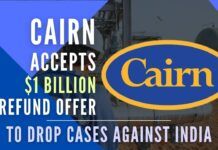 LoUGate refuses to go away – PNB kept issuing them even...