The year 1857: Rise of British crown and downfall of Hindu kings

Hindu was proud warrior till 1857. Fierce, impossible to subdue. Till then, if the invaders got better of one kingdom, another rose against them. Villagers would abandon the villages and relocate into hills and forests and continue to fight.

In 1857, the British crown took over and guaranteed stability to the Hindu kings in lieu of peace. And our downfall began.

Hindu kings became like zoo animals: food security, no struggle, no danger; and as a result, fight drained out of them. Instead, they became supplicants to the British. Brother princes would lobby with the British for the throne after the death of the king.

This culture soon percolated to the masses. Riches lay not in work, but in ingratiating oneself to those in power. Power itself was a means not to better a lot of those one “ruled” on the authority of the British, but to skin them alive to enrich oneself.

The culture lives on. We remain the best bootlickers, spineless, expert supplicants, and whatever power, bureaucratic or political, we get, it is used only to loot the exchequer and the public and to enrich oneself.

Safety is not necessarily good. If it is outsourced and not earned by your own arms, it will infantilize you. 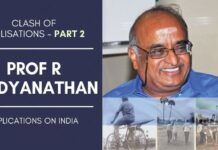 In Part 2 of this series, Prof RV explains why RoP and RoL are behaving differently in India 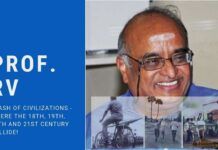 Prof RV on Clash of Civilizations – India. Where the 18th, 19th, 20th and 21st century collide