Rahul’s mysterious jaunt – What will Congress scion do in the US (if he is there)?

When it comes to holidaying abroad, Congress Vice President Rahul Gandhi has a track record which is second to none. The ‘failed’ Messiah of the `Grand Old Party’ is known to fly in and out of India on “missions’ that not many people are aware of. The mystery that surrounds his ’disappearance’ tends to give rise to speculation that often gets unflattering comments in Social Media. Netizens often links such jaunts to a variety of purpose including meeting someone “special.” After all, the 46-year-old Gandhi scion is one of the most eligible bachelors of Indian politics.

In the past, such jaunts—other than his two-month-old sabbatical—were mostly social media events, but this time his visit to the US had triggered a bitter war of words between the Congress and the BJP.

The BJP must have been looking for an opportunity to take on Rahul, who has been unrelenting in his criticism of Prime minister Narendra Modi and his “suit boot ki sarkar”. In many cases, Rahul hit below the belt and his ‘personalized’ jibes left the BJP fuming. Rahul’s attack on the PM for globetrotting and not finding time to visit debt-ridden farmers who are committing suicides, is an example of one example of such ‘target’ practice.

So, when the moment for retaliation came, the BJP was unsparing. It made an issue out of a non-issue, dragging Rahul’s personal visit into the centre of mega controversy and claiming he had fled the nation because his own allies did not want him to campaign in Bihar. Much of these chargers may have no substance, but they will stick against a leader who has himself mastered the art of `shoot-and-scoot’.

The entire controversy took a curious turn after they BJP and a media report debunked Congress’ claims that Rahul has gone to the USA to attend a conference ‘Weekend with Charlie Rose’ at Aspen Institute in Colorado.

A day after the Congress spokesman Randeep Singh Surjewala spelled out this reason to justify Rahul’s absence and accused the BJP of spreading “petty canards” as it was foreseeing its “imminent loss” in the upcoming Bihar Assembly polls, the BJP bowled a goodly at the Congress by claiming that the above Aspen conference was over in July itself.

A day later on Thursday, the BJP accused the Congress of “resorting to falsehoods” to mislead the nation about the reason behind Rahul visit to the US. Taking a swipe at Rahul, BJP spokesperson G V L Narasimha Rao said:

“Rahul would be “travelling back in time” as the schedule of the The Aspen Institute showed that that its annual event ‘Weekend with Charlie Rose’ was held between June 25 and July 4.”

“Congress is unable to give proper reason for Rahul’s absence. Every day they are trotting out a new story, coming out with a new fact that turns out to be false. It is resorting to apparent falsehood and lies to hide facts we don’t know,”

In an interview to The American Bazaar, Karen Peterson, Registrar and Conference Manager, Aspen Ideas Festival, said that “I don’t see Rahul Gandhi listed as a speaker in any Aspen related event, public or private, in the past or in the near future”.

According to the report, this year’s conference theme was: ‘Smart Solutions to the World’s Toughest Challenges’. Presented by the Aspen Institute in partnership with The Atlantic magazine, the Aspen Ideas Festival is the nation’s premier, public gathering place for leaders from around the globe and across many disciplines to present and discuss ideas and challenging issues. Some 350 presenters, 200 sessions, and 3,000 attendees comprised the annual festival this year, in July.

A tragic-comic figure in the politics who has failed to live upto to the expectation of his own party, Rahul is fast emerging as a big liability for the Congress which badly needs a leader to prevent its slide. A peripatetic and inaccessible Rahul Gandhi doies not fit the bill. 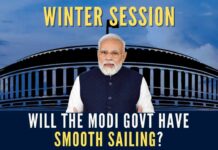 Propounder of the two-nation theory Allama Iqbal finds place in the...