With India’s capital city-state Delhi going for polls on May 12, the ruling Aam Aadmi Party (AAP) is making tall claims on their delivery of “high-quality education” in Government schools and “world class” health clinics in each area. What is the reality? Well, it proves once again that AAP is a party of liars. While claiming super quality education in Delhi Government schools, Chief Minister Arvind Kejriwal preferred to send his son to one of the famous private schools in Noida, Uttar Pradesh. His son just now finished Class 12 from a famous private school chain Delhi Public School’s Noida branch.

Like Kejriwal, his Deputy Manish Sisodia, who is also holding the Education portfolio preferred to send his son to another posh private school. His son studies in a famous private school chain run by Amity Group’s Ghaziabad branch in Uttar Pradesh. On checking further, it transpired that none of the Delhi State Ministers’ children study in the highly bragged Government schools. Such is the hypocrisy of AAP party leadership, which has royally fooled the people of Delhi. The majority of AAP MLAs are not sending their kids to Government schools. PGurus contacted more than 45 MLAs and their families to know where their kids are studying. The majority have put their kids in plush private schools.

Similar is the fake claim by AAP about the creation of “world class” health facilities in Delhi. While floating all these big claims, Chief Minister Kejriwal preferred to run to Jindal Group’s Bangalore hospital each and every time for the past five years.

By showering money through advertisements, Kejriwal and AAP have managed to silence the Delhi media. Many in the media have been bought by AAP financially. Ergo, no checking of the tall claims of AAP!

People of Delhi should keep these things in mind when they go for polls on May 12. The AAP party and its leader Arvind Kejriwal have no qualms telling lies. They even arrange attacks on themselves to get publicity. Now it is proved that the latest Kejriwal attacker Suesh Chouhan is also an AAP local leader and it was sure that Kejriwal was trying to get into limelight through this stage managed attacks[1]. 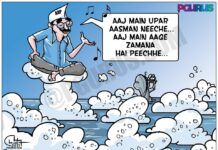