Analyzed below are the developments in opposition across the nation which should make the BJP happy, but if it makes the party complacent there would be a price to pay.

The closer the Lok Sabha election gets, the dimmer the prospect of a pre-poll opposition front becomes. The euphoria which had been generated by the photo-op of various opposition leaders on a single stage at the swearing-in ceremony of HD Kumaraswamy in Bengaluru, raising hands in unison, has already dissipated. The realisation should be settling in that the best case scenario for the opposition parties is a coming together after the election result to thwart the Modi Government from getting a second term. If there had been any lingering hope of a pre-poll understanding, it was shattered by two senior opposition leaders recently, Sharad Pawar of the Nationalist Congress Party and Sitaram Yechury of the Communist Party of India (Marxist) who dismissed the idea.

The influential regional parties do not even have a common agenda of development or governance; the only binding factor is their desire to see Modi’s back.

Nobody barring a fistful of parties wants a pre-election alliance with the Congress. The Samajwadi Party, which contested the Uttar Pradesh Assembly poll in partnership with the Congress, is not enthusiastic about a similar experiment for the Lok Sabha contest. The Bahujan Samaj Party has decided to contest against the Congress (and the BJP of course) in the forthcoming Assembly poll in Madhya Pradesh. If this situation holds out until the general election, the Congress would be staring at another rout and a further decline of its stature nationally and in the eyes of the regional parties.

The problem for the Congress is that it brings nothing on the table for the two regional outfits in Uttar Pradesh. If the SP and the BSP were to fight unitedly in the State, it would mean a division of seats between the two. Why then would they want a third partner who will seek to further dent their seat share without adding meaningfully to their victory prospects?

The Trinamool Congress is unlikely to tie up with the Congress either, in West Bengal. Its leader Mamata Banerjee nurses dream of leading the coalition, and this would not fructify if she tied up with the Congress which would project its president Rahul Gandhi as the chosen leader. The Congress may at best align with the Left in the State, but then the Left is already a spent force there, and two spent forces coming together is not going to create a political upheaval. Besides, there is a strong lobby within the CPI (M) which strongly disfavours an alliance with the Congress.

Faced with the prospect of fighting it alone, the Congress is pinning its hopes on understandings with the NCP in Maharashtra, the DMK in Tamil Nadu and the National Conference in Jammu & Kashmir. In Maharashtra, it hopes to cash in on the Bharatiya Janata Party-Shiv Sena friction, and in the southern State, it prepares to exploit the divisions in the ruling AIADMK and gain something from tacit backing from actor-turned-politician Kamal Haasan. But even in these combinations, barring in Maharashtra, the Congress will be the minor player and it can hardly hope to add significantly to its individual tally and stake claim to form a Government at the Centre it wants to lead. Its only glimmer of hope in the grim situation in Bihar, where it will partner Lalu Prasad Yadav’s party and hope to benefit from rumours that Nitish Kumar’s Janata Dal (United) is unhappy with his party’s alliance with the BJP. In Karnataka, the Congress’s alliance with the Janata Dal (Secular) has got off to an uneasy start and the coalition cannot be taken for granted.

Despite all the hyperbolic talk, even regional opposition unity is not complete.

With the Congress apparently out of the reckoning, attention shifts to the powerful regional outfits. But since neither of them have any real influence outside their respective home States, it is difficult to understand as to how they can help each other and later come together as a united front against the BJP. The leadership issue is just one impediment. These parties do not even have a common agenda of development or governance; the only binding factor is their desire to see Modi’s back. The country’s contemporary political history shows that such glue often fails to unite — and even if it does, it does not hold on for long. Are the voters prepared for a spell of instability which makes governance its primary victim?

And, despite all the hyperbolic talk, even regional opposition unity is not complete. One of the major regional parties, the Biju Janata Dal in Odisha, has shown no inclination to join the opposition bandwagon. Even K Chandrashekhar Rao of the Telangana Rashtra Samiti, for all his initial efforts at crafting a united front, has decided to now take it easy. He did not turn up in Bengaluru reportedly because he didn’t wish to share the stage with either the Congress or the Telugu Desam Party of Andhra Pradesh. While on this issue, it must be kept in mind that the DMK in Tamil Nadu could well swing towards the BJP-led NDA in case the BJP decides to dump the AIADMK.

These developments should make the BJP happy, but if it makes the party complacent there would be a price to pay. As it is, the BJP will find it difficult to repeat its near-peak 2014 performance in the northern and the western States. Opposition disunity apart, the ruling party has to make significant gains in the eastern States of Odisha and West Bengal and ensure that it does not lose too much in the States it controls if it hopes to retain power at the Centre. The coming State polls in Madhya Pradesh and Rajasthan will test if the party is prepared for the 2019 challenge. 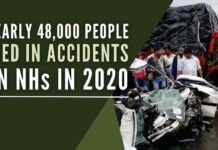 Nearly 48,000 people died in accident on India’s National Highways in 2020. Major reasons are drunken driving, use of mobile phones, overspeeding 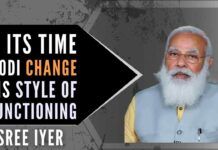 Recent convictions welcome, but justice for victims will come when top...