[dropcap color=”#008040″ boxed=”yes” boxed_radius=”8px” class=”” id=””]T[/dropcap]here is little doubt that the upcoming elections to the 403-member strong Uttar Pradesh assembly will give the nation a hint of who would lead the country. With a whopping 80 Lok Sabha seats coming from the State, political parties across the spectrum will do all possible to try and stop the BJP advance there. The 2014 Lok Sabha results (71/80 for the BJP + 2 allies) sent shockwaves through their fortresses.

Leaders of the Congress-Third Front combine understand that 2017 through 2019 could witness the end to many political careers. A BJP victory in 2017 would not only mean smooth sailing for Prime Minister Narendra Modi in 2019 (he is anyway expected to win a second majority) but would also sound the death knell of divisive politics of various parties that have plagued the nation.

Leaders, including former chief ministers Mulayam Singh Yadav and Kumari Mayawati, who have been harbouring Prime Ministerial ambitions, much as those harboured by Bihar chief minister Nitish Kumar, would be banking on a poor performance by the BJP (a repeat of Bihar, they hope) to propel them towards the Centre. The venerable 76-years-old Mulayam Singh Yadav possibly realises this could be his final bid for the top job.

The incumbent Samajwadi Party is plagued with problems to such an extent that its leadership and cadres may end up fighting an internal battle rather than as a united party. The latest internal feud played out on the issue of the merger of the Ansari brothers’-led Qaumi Ekta Dal with the SP. Shivpal Yadav announced the decision of the merger (impossible without a nod from MSY) only to face opposition from his nephew-cum-Chief Minister Akhilesh Yadav. The merger was called off.

[dropcap color=”#008040″ boxed=”yes” boxed_radius=”8px” class=”” id=””]T[/dropcap]his was not the first time that the UP chief minister has differed with his father and uncle (Shivpal) on issues pertaining to the party. Backed by his uncle Ram Gopal, Akhilesh is today leading an independent charge of the party, contrary to what was expected of him after he assumed office. At that time, it was felt that the inexperienced Akhilesh would play to his father’s tune.

The SP today is split within the family on critical issues. Akhilesh and uncle Ram Gopal voted to keep the SP out of the Bihar Mahagathbandan and Mulayam Singh Yadav had to walk out. Akhilesh Yadav seems not to like the idea of hobnobbing with either Lalu Yadav or Nitish Kumar. This crashes all hopes of creation of an ill-conceived all-India anti-BJP front with Congress-Left backing.

The Bahujan Samaj Party, too, is in bad shape. Mayawati’s party faced a debacle in the 2014 Lok Sabha elections after she was deserted by her core dalit vote bank. The BSP today faces a large scale exodus. Despite whatever troubles she has bounced back from in the past, it is highly unlikely that UP’s Iron Lady could make a timely recovery.

Mayawati faces a rebellion from top party leaders – Swami Prasad Maurya, Jugal Kishore and RK Chaudhary. Their scathing attacks would’ve shaken the earth under her feet. Her ground cadre would be split in their loyalties towards her, the party, and their respective leaders /strongmen. The very existence of the BSP is now at stake.

[dropcap color=”#008040″ boxed=”yes” boxed_radius=”8px” class=”” id=””]T[/dropcap]he Congress, desperately trying to grasp any vestiges of political mileage it can squeeze out of the situation, has indicated it would embark upon a campaign led by Priyanka Vadra with former Delhi CM Sheila Dikshit as chief ministerial nominee. This is clearly an internal admission within the party of the failure of family scion Rahul Gandhi and collapse of the Congress unit in UP. The sinking party, having been voted out of many States, is undeniably placing the final cards in its deck on the table.

Sheila Dikshit as the face of the Congress’ UP campaign must be taken as the party’s acceptance of strategist Prashant Kishore’s idea of projecting a Brahmin face as CM candidate. It is also indicative of the leadership vacuum in the State. Such a leadership is created by the fears of top leaders who not want challengers rising and threatening their comfort zones.

The BJP, on its part, is leaving no stone unturned. To expand its already widened footprint, it has announced a merger with the Apna Dal led by Mirzapur MP, Anupriya Patel. The merger aims to provide the BJP a much needed boost within the OBC communities of the Varanasi-Mirzapur region, especially the Kurmis. Anupriya Patel has also been inducted in the cabinet on July 5, 2016. However, the merger, media reports suggest, may be stalled by the opposition of Anupriya Patel’s mother, but a substantial portion of the party and community is likely to go with Anupriya Patel, who unlike her mother, has won an election.

The BJP would also be counting on its 2014 strategy. Its master strategist Amit Shah would’ve been keeping a gimlet eye on the state leadership and cadres after the Bihar fiasco.

[dropcap color=”#008040″ boxed=”yes” boxed_radius=”8px” class=”” id=””]T[/dropcap]he Modi-Shah duo would likely pre-emptively avoid any TV interviews or speeches on sensitive topics (caste, reservation, conversion, etc) by loose-mouthed leaders and ideologues that could hurt the party’s prospects. The party’s chief poll plank would be the developmental agenda of Prime Minister Modi and his Chief Ministers and the cadre would be well advised to stay safe from any destructive/distractive activities of fellow travellers.

The mandate in this election will represent the future aspirations of the voters. Whether the voters stick to the developmental agenda on which they boosted the BJP to the Centre, or whether they fall back to the divisive politics of the past, is a choice that can only be made by the electorate. With no Bihar-like grand alliance possible in Uttar Pradesh, and the entire opposition in tatters, a BJP government in UP is more than plausible at this stage.

The author is a freelancer. He tweets at @therijuluppal
Note:
1. Text in Blue points to additional data on the topic. In UP, BJP won 17 seats out of 20 where VVPAT machines were installed with EVM 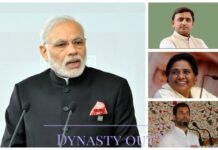 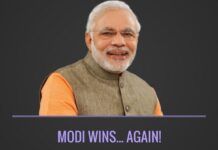