[dropcap color=”#008040″ boxed=”yes” boxed_radius=”8px” class=”” id=””]T[/dropcap]he ideological-communal polarisation of West Bengal by Chief Minister Mamata Banerjee and the Trinamool Congress has bought the State to the brink of another Direct Action Day, with incidents of organised and planned violence occurring regularly against the hapless Hindu community.

Banerjee has polarised the State in an unprecedented manner, ripping apart the social fabric. Her form of communal (read Islamic) politics could bring the Jamaat e Islami cadres to shame. Under her rule, even Durga Puja celebrations have been endangered in some places where Islamists objected to them. A village in Birbhum district has been unable to celebrate and engage in festivities in order to “not antagonise the Muslims” for four years now. Mamata’s hunger for power has made her resort to communalism to appease her vote-bank.

In January 2015, in Usti, South 24 Parganas, a mob unleashed large scale violence in the market place attacking Hindu shops and properties. This is in continuance of the violence the district has seen as extremists engage in a systematic ethnic cleansing of Hindus. Hindu Samhati, an NGO that monitors and reports incidents of violence against Hindus, has alleged that the violence in Usti was allegedly supported by local MLA and Minister of State for Minority Affairs, Giyasuddin Mollah, who reportedly asked the police to release the Muslims held by law enforcement officials on the spot, asserting they were his men. There was rampant looting and bombs too were hurled indiscriminately to terrorise Hindus.

In July 2015, in Sirsi, North Dinajpur, illegal immigrants burnt down houses of tribal families and destroyed their crops to capture the farm land owned by these families. The administration has allegedly again turned a blind eye to this.

[dropcap color=”#008040″ boxed=”yes” boxed_radius=”8px” class=”” id=””]T[/dropcap]hese are not isolated incidents. Rural Bengal has been caught in a spiral of Islamist violence and Hindus are being pushed out of their lands. Village after village has seen incidents of Hindu houses being burned and lands being occupied by Muslims. A stage is being set for a demand for “Greater Bangladesh” and this is being supported by extremists across the border; the Chief Minister seems to have succumbed wholeheartedly.

As part of the appeasement policies, the State government had sanctioned a monthly salary for all Imams and Muezzins in the state, but this was declared unconstitutional by the High Court.

More recently, West Bengal saw two massive incidents of Islamist violence in 2016. In January 2016, a thousands-strong mob attacked the Kaliachak Police Station in Malda district, torched buses and vehicles and looted and torched Hindu properties. It is to be noted that this is a major hub for poppy cultivation and illegal cross-border trade.

In December 2016, Dhulagarh in Howrah district saw mobs attack Hindus and burn their houses. Muslims in Dhulagarh had allegedly brought out a procession with loudspeakers on December 13 to celebrate Eid-e-Milad and as the procession moved, the Hindus at Dhulagarh requested for lowering of the volume as they were observing Margashirsha Purnima and were unable to conduct their rituals as the music was very loud. This apparently riled the Muslims and they started attacking Hindu homes and shops. Ironically, orthodox Islamists should be averse to music itself; this seems to have been an assertion of power.

This assertiveness of Muslim extremists in the state is empowered by the Chief Minister’s communal politics and the blind-eye turned by leftist NGOs and human rights organisations.

[dropcap color=”#008040″ boxed=”yes” boxed_radius=”8px” class=”” id=””]T[/dropcap]he problems in the State are deeper than what meets the eye. In 2014, Bangladesh Foreign Minister Abdul Hassan Mehmood reportedly expressed concerns to National Security Adviser Ajit Doval that money from the infamous Saradha scam had been diverted to fund the Jamaat-e-Islami in Bangladesh.

This in itself is a national security concern. The Jamaatis consider India as a sworn enemy and have been unleashing violence on minorities in Bangladesh. The same Jamaat has been strengthening the extremist forces in West Bengal. West Bengal has today become a hub of terror activities and bomb making seems to be the top employment generator there.

The alleged diversion of funds to the Jamaat raises serious questions regarding the Trinamool Congress, which had blocked the Teesta water deal in 2011 and weakened Sheikh Hasina’s domestic position at a time when she was running a campaign against the anti-India elements in Bangladesh.

The alleged involvement of TMC MP Ahmad Hassan Imran as the channel through whom the funds were diverted is distressing, as he is a former president of the banned Students Islamic Movement of India (SIMI).

It is clear that all is not well in the State and the Left-dominated media has been continuously blacking out all media reports of the incidents. As continuous threats of the Al-Qaeda and more recently the ISIS are emerging in the eastern state, it is time for the Centre to send in the Indian Army with a mandate to dismantle the terror hubs, the cross-border drug trade and the bomb factories of West Bengal. Certain areas of the State will undoubtedly need to be placed under AFSPA for a certain period.

[dropcap color=”#008040″ boxed=”yes” boxed_radius=”8px” class=”” id=””]T[/dropcap]he Centre is bound by Article 355 of the Constitution to protect the State against such internal disturbances and external aggression of the Jamaatis (of Bangladesh) and is empowered to impose Article 356 before the situation worsens. The recent incidents of attack on Bharatiya Janata Party leaders, including senior party functionary Krishna Bhattacharya and Rajya Sabha MP Rupa Ganguly, and the bomb attack on the party office, point to the degeneration of law and order in the State. The Jamaat is active and is going for the kill.

The Asaleha Girl’s College was totally gutted and shut down

Even TMC Minister, Nure Alam Chowdhury was heckled, beaten up and held hostage for several hours by fundamentalists in his village in Birbhum district, for trying to expand the Girl’s College run by the family on their own ancestral land, which had been encroached by a mosque. The Asaleha Girl’s College was totally gutted and shut down.

The Centre must act before it is too late.

The author is a Delhi-based advocate and independent analyst. He tweets at @therijuluppal
Note:
1. Text in Blue points to additional data on the topic.
2. The views expressed here are those of the author and do not necessarily represent or reflect the views of PGurus. 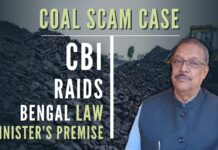