BJP may have the last laugh in Assam polls

Bharatiya Janata Party (BJP) has strengthened its position in the upcoming Assam Polls assembly elections by getting into an alliance with Asom Gana Parishad (AGP).

[dropcap color=”#008040″ boxed=”yes” boxed_radius=”8px” class=”” id=””]A[/dropcap]ssam Pradesh Congress tried its best that the alliance between BJP and AGP doesn’t go through. However, identical electoral base forced these parties to fight the elections together rather than splitting each other’s vote which could have brought the downfall for both the parties.

Assam state BJP president, Sarbananda Sonowal did not appear excited about the alliance with AGP as the section of party led by AGP legislative party leader Phanibhusan Chowdhury is known to be close to Congress. They had also met state chief minister Tarun Gogoi few day.

The deal with the BJP, however, was clinched by the more powerful faction of the AGP, led by party president Atul Bora.

An undercurrent of misunderstanding in the alliance was inevitable as both the AGP and the BJP have their primary electoral base among the Assamese Hindu middle class, which controls the politics of the entire upper and central Assam.

[dropcap color=”#008040″ boxed=”yes” boxed_radius=”8px” class=”” id=””]I[/dropcap]n spite of the AGP’s fast dwindling support base, its call for regionalism still holds appeal in large parts of Assam. On the other hand, a vast number of Adivasi tribes working in numerous tea gardens of upper Assam had voted for the BJP in the last parliamentary elections.

As the AGP also enjoys acceptability in upper Assam and good rapport with numerous indigenous communities living on both sides of the Brahmaputra river, mutual contests between the AGP and the BJP would have benefited the Congress.

The Congress has decided to contest the elections alone, for the simple reason that other political outfits have chosen to avoid the Congress.

The Muslims, who constitute almost 34 percent of Assam’s population, particularly the Bengali speaking ones of lower Assam, are now tilting towards the All India United Democratic Front(AIUDF) of Badruddin Ajmal. This time Congress is not even sure of support from the Assamese speaking Muslims of upper Assam who had stood by the party during the last parliamentary poll.

[dropcap color=”#008040″ boxed=”yes” boxed_radius=”8px” class=”” id=””]I[/dropcap]n the 2009 Lok Sabha polls, its share of vote jumped to 16 percent and the party captured four seats. Although in the 2011 assembly elections it experienced a slight reversal of fortunes, the party came out with flying colours in the 2014 Lok Sabha election when it captured 36 percent votes and seven out of the 14 Lok Sabha seats from Assam.

Observers of the northeastern politics think this time the BJP may lose some of its popularity among the Assamese Hindu voters due to its decision to grant the right of stay to immigrants who are minorities in Bangladesh and transfer of land under the Indo-Bangladesh Land Boundary Agreement. But these two factors may not be enough to shift the ground completely for the BJP.

The appearance of the AIUDF on Assam’s political map has brought about a qualitative change. The Front got 39 percent of the state’s Muslim votes in last polls while the Congress’ share came down to 40 percent.

[dropcap color=”#008040″ boxed=”yes” boxed_radius=”8px” class=”” id=””]T[/dropcap]here has been a 10 percent decline in the Congress’ overall vote share in Assam between the 2011 assembly elections and the 2014 Lok Sabha polls, and a major reason behind it is AIUDF’s poaching into Congress’s traditional vote bank of Muslims and the Bangladeshi immigrants. The AIUDF had won 18 seats in the 2011 assembly elections and led in 24 assembly segments in the 2014 parliamentary polls.

Anti-incumbency factor may go against the Congress this time. Tarun Gogoi is generally considered to be competent but there is a palpable yearning for a new face in the chief minister’s chair.

That the Congress and the AIUDF could not form an alliance is due to the fact that both are trying to outwit each other in order to become the principal face of the Muslim electorate. The AIUDF will contest in 60-odd seats and this does not augur well for the Congress.

The BJP’s small partners like the Boro People’s Front (BPF) with 2.1 percent votes will chip in for its success. The BPF had won 12 assembly seats in 2011 and the Boros have significant presence in 50 other seats.

Arithmetical calculations favour the BJP-AGP-BPF combination. But Tarun Gogoi has many upset victories to his credit.

Here is an informative link on Assam’s history and culture. 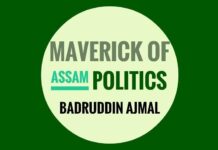 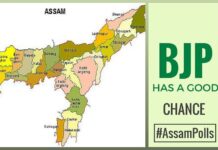 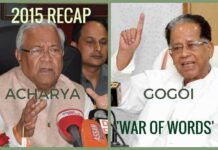 BJP has a new face in Assam