[dropcap color=”#008040″ boxed=”yes” boxed_radius=”8px” class=”” id=””]J[/dropcap]ayalalithaa will consider herself lucky. If it were not for the familial intrigues in the house of Dravida Munnetra Kazhagam (DMK) supremo Karunanidhi, she would not have come back to power. Add to that the happy coincidence of Captain not joining the DMK alliance, worked for her.

Except for the solace in the centrally administered tiny state Puducherry, for the Grand Old Party of Congress, these results are a major setback. Alliance with Congress by allotting them 41 seats, had spoiled the DMK’s surge in Tamil Nadu. Among the allotted 41 seats, Congress could only win 8 seats. An advantage to Jayalalithaa was the divided family of Karunanidhi, which forced him to land in electoral fray in a wheelchair at the ripe old age of 93. Announcing Stalin as Chief Minister candidate was blocked by Kanimozhi, the daughter of Karunanidhi from his third wife. Already Stalin’s brother Azhagiri had left the father’s camp alleging him of being biased towards Stalin.

If there was no tussle in family, Tamil Nadu would have witnessed the usual interchanging of power between the AIADMK and the DMK.  For the first time since 1984, the state is witnessing the victory of the ruling party. Moreover, the state witnessed a multi cornered contest with PMK, PWF and BJP fronts fielding candidates in all seats, perhaps splitting the votes.

The Catholic Bishop Council come out openly supporting Congress and its alliance partners in Tamil Nadu and Kerala. But Jayalalithaa managed to surmount all odds and snatched victory. Now her next crisis is the forthcoming Supreme Court verdict expected to be announced by August or September in the Disproportionate Assets case.

Sustained stand of Right Wing against the illegal Bangladeshis and 15 year old Congress rule paved way for the huge decisive victory of the BJP in Assam. The Hindu consolidation was the real force behind this victory. The Hindu voters decided to teach a lesson to the Muslim party AIUDF hegemony in the state.

The Communist Party of India (Marxist), CPI(M), has lost face in West Bengal. The alliance with Congress was the last nail in their coffin. The interesting thing was CPI(M) became a minor partner in the alliance when results were announced in the state, which was a citadel of the CPI(M) for 36 years. CPI(M) got just 26 seats and its partner Congress got 44 seats. It remains to be seen as to how the CPI(M) is going to dig itself out of this hole. All the Delhi centric operations by Congress and Left and its Liberal accessories failed to corner Mamta Banerjee in West Bengal.

[dropcap color=”#008040″ boxed=”yes” boxed_radius=”8px” class=”” id=””]N[/dropcap]othing much to enjoy in the victory in Kerala for the Left parties. It was the usual interchange of power in the state, a phenomenon for the past four decades. For CPI(M) led LDF’s victory, credit is actually due to the acute anti-incumbency factor against the ruling Congress led UDF. The notable thing from Kerala is the victory of the BJP in one seat. The saffron party’s entry into the state assembly was blocked by every available means by the LDF and UDF since 1980. Now that political isolation of the BJP in a so called secular-values-preaching-state is over. BJP also reached second position in eight seats in Kerala. This is really a heart warming moment for the party in the southern state.  What is also impressive is that the BJP alliance got over 25000 votes in around 80 constituencies. There are a total of 140 constituencies in Kerala.

The BJP and its allies GJM also managed to bag six seats in West Bengal Assembly. Meanwhile, the performance of BJP in Tamil Nadu was pathetic. Except two candidates, all lost deposit.

Thankfully Congress sycophants have not yet given credit to Rahul Gandhi for its stirring victory in tiny state of Puducherry. The reason for the victory is more due to the anti-incumbency factor against the ruling party AINRC, the regional outfit launched by Chief Minister Rangaswami, a rebel Congress leader, than anything else.

For BJP at the national level, it has to be seen, as to how it deals with the AIADMK and Trinamool Congress in the coming days. By establishing a strategic alliance with these two powerful regional parties, BJP can manage Rajya Sabha in future. Will they? Only time will tell.

The Election Commission of India has done an excellent job of displaying the results of these elections using interactive graphics. 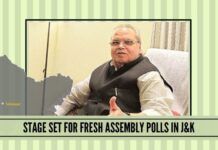 In Assam, BJP finds a crucial ally, joins hands with the...