A few days back, Delhi Police registered a case against controversial arms dealer Sanjay Bhandari under Official Secrets Act, based on the complaint filed by the Ministry of Defence (MoD). PGurus had reported about this relationship between Hindustan Times’ Executive Editor Shishir Gupta and arms broker Sanjay Bhandari. Our article in June, exposed the findings of intelligence agencies that Gupta and Bhandari had exchanged 478 telephone calls in just three months (March to May 2016).

Defence Ministry has entry records of Gupta and Bhandari coming together to meet Parrikar.

Even Shishir Gupta, in his correspondence with PGurus admitted that he made “some infrequent” calls. “Prior to the end of 2015, my Client neither met nor knew Mr. Bhandari who he first came across at a social function recently in late 2015. On being informed that Mr. Bhandari was working in the defence sector, my Client exchanged numbers and since then there were some infrequent calls,” said Gupta in the legal notice. But the fact of the matter considering the intelligence records is that Gupta made 478 calls in just three months with controversial arms dealer Bhandari. That is over 5 calls a day!

It is known to all in the Defence Ministry that a few months back Defence Minister Manohar Parrikar had fired journalist Shishir Gupta for coming to his cabin with arms dealer Sanjay Bhandari without a prior appointment. Gupta had misused his journalist clout to enter Parrikar’s office and took Bhandari along with him. Defence Ministry has entry records of Gupta and Bhandari coming together to meet Parrikar. It is expected that these records of entry would also be handed over by the MoD to the Delhi Police.

In May, the noted internet warrior @DrGPradhan had posted some pointed tweets at Shishir Gupta after which he suspended his Twitter account (@sisir_gupta). The million dollar question is if Delhi Police will act against this high flying Editor. It is a known fact that Shishir Gupta enjoys clout in South Block and North Block for the past 10 years due to his proximity with Arun Jaitley and P Chidambaram. These two heavy weights jointly released Shishir Gupta’s book a few years ago and he was always seen in the durbars of these two. Moreover Shishir Gupta is also close with Delhi Lt. Governor Najeeb Jung. Will these high-point connections  be a problem for Delhi Police in questioning Shishir Gupta? 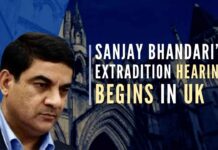 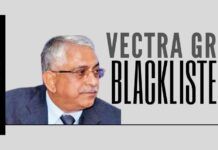