The Women’s Wall organised by the CPI-M led Kerala Government on the New Year Day of 2019 ostensibly to usher in renaissance to the State sent out a silent message that the 34-year CPI-M-led rule in West Bengal was a total failure. Brinda Karat, the Politburo member of the CPI-M, who led the Women’s Wall organised in Kerala as a mark of protest against the growth of the RSS and the BJP in the State, while praising the southern State as the most progressive State in the country, did not utter a single word about the situation in Bengal, the legislative assembly of which had sent her to the Rajya Sabha (the Upper House of Indian Parliament).

Following intelligence reports that Natesan’s life was under threat from the CPI-M  cadre, the Narendra Modi Government has provided him with Z category protection.

Addressing the CPI-M sponsored Women’s Wall, which was organised with the active support of the official machinery of the Kerala Government, Brinda Karat (wife of Prakash Karat) focused her entire speech in attacking the BJP, RSS and its leader Dr Mohan Bhagwat.

“The CPI-M comrades have succeeded in destroying and demolishing the Mad House which Kerala was once. Today Kerala is the most progressive State in the country and we have destroyed the Manuwadi Brahminical System which prevailed in the State. Those who abused Kerala’s social reformers like Sree Narayana Guru and Mannath Padmanabhan are praising these revolutionaries to cheat the new generation,” declared Karat much to the amusement of the people who watched her speech which was being telecast live from Thiruvananthapuram by the CPI-M owned People TV.

Perhaps, the wife of the former party secretary Prakash Karat was not aware of the fact that it was the CPI-M leaders and cadre who had demolished and vandalised the statues of Sree Narayana Guru and Padmanabhan. There were allegedly many attempts by the CPI-M cadre to murder Vellappali Nadesan, the General Secretary of the Sree Narayana Dharma Paripalana Yoga, the apex body which regulates the Ezhava community in the State. Following intelligence reports that Natesan’s life was under threat from the CPI-M  cadre, the Narendra Modi Government has provided him with Z category protection. Natesan is the only social/ political leader in the State who enjoys 24X7 security cover by the commandoes of the elite ITBP. Interestingly, Natesan was a participant of the Human Wall on Tuesday.

Karat also alleged that RSS Sarsanghachalak  Dr Bhagwat had said that women alone were responsible for the crimes perpetrated against them by men. But she did not tell where and when the RSS chief made this Statement.

Though Chief Minister Pinarayi Vijayan and his aide Kodiyeri Balakrishnan had declared that the Women’s Wall would be an apolitical event, it turned out to be everything except apolitical. All speakers made use of the opportunity to attack the RSS and the BJP which gave the impression that the entire problems faced by the country were due to these two organisations.

The internal fights in the CPI-M between the factions led by V S Achuthanandan and Chief Minister Vijayan were visible during the event. The chief minister did not bother to acknowledge Achuthanandan when the latter was helped to the stage by his aides. The nonagenarian former chief minister and Vijayan sat grime faced throughout the event while the latter was seen holding the hands of Brinda Karat with glee.

The TV channels sponsored and funded by the CPI-M claimed that the Wall turned out to be “a big success”, the Congress owned JaiHind Channel said that there were many breaches in the 625 km long women wall which began from Kasaragod and ended up at Thiruvananthapuram.

While the Ayyappa Jyothi held last week by the  devotees of Lord Ayyappa sent a silent but powerful message to the forces which are working to derail the customs and traditions of the shrine in the Western Ghats, Tuesday’s Women’s Wall could be portrayed as a carnival or women’s day out, according to Prof C I Issac, eminent historian and political commentator in Kerala. 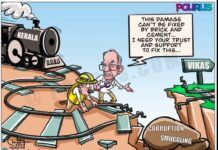