[dropcap color=”#008040″ boxed=”yes” boxed_radius=”8px” class=”” id=””]F[/dropcap]ormer India fast bowler and current International Cricket Council (ICC) match referee Javagal Srinath believes that left-arm seamer Zaheer Khan’s decision to call time on his career came at the right time. The 37-year-old Zaheer has contributed immensely for the country and should be proud of his achievements, Srinath added. Zaheer announced his retirement from international cricket on October 15 after a shoulder injury that has put paid to his efforts to return to action, capping a 14-year long career punctuated by considerable success as well as crippling injuries.

“I think it was right decision at the right time. He has thought about it for a while and taken the decision. I think he has played his cricket to the fullest. He was waiting for the shoulder to come in good shape, but going by the age – he is now 37 -it is going to be tough and it is a healthy decision,” Srinath, who is promoting the Red Bull Campus cricket tournament, told IANS in an interview on Friday.

“Zaheer has been a champion bowler. He has done tremendous for India’s win in the 2011 World Cup. He is one of the best in the world for sure. He should be proud of his career,” he said.

[dropcap color=”#008040″ boxed=”yes” boxed_radius=”8px” class=”” id=””]S[/dropcap]peaking on Sehwag, the 46-year-old Srinath said, “Look at his (Sehwag) age. All these guys have played enough. It is a knowledgeable decision that they have taken. They understand them very well. They have played their part for the national side”. Srinath believes that the Delhi-born opener’s century (105) on his Test debut against South Africa in Bloemfontein in 2001 was the best innings he has seen.

“Sehwag’s debut 100 against South Africa is probably the best innings I have seen. He has plenty (of talent). The way he played the Champions Trophy in 2003, some of the best knocks in the world and the 309 against Pakistan in the Multan Test was a super effort. Scoring a triple hundred in a Test is not that easy, even double hundred,” he said.

The Mysore born bowler, who took 551 wickets in both Tests and One-Day Internationals over an international career spanning 12 years, named Ishant Sharma as the leader of the bowling attack for years to come, but pointed out that the pacer needs to play matches and not sit out due to his antics on the field.

[dropcap color=”#008040″ boxed=”yes” boxed_radius=”8px” class=”” id=””]I[/dropcap]shant has been handed a one-match suspension for behaviour that breached the ICC code of conduct during the Colombo Test. For this, Ishant will miss India’s first Test against South Africa, in Mohali, in November. “Ishant is the leader of the pack. You need someone like Ishant to lead the rest. The others must understand the format, workload and distribute the load among them in a very proper way. It is not only the responsibility of Ishant but the team management to distribute the work and duties accordingly,” he said.

“I think he has already realised his mistake. He can’t miss out on games, which is not correct. At this age you need to play more and more and not sit out for your antics on the field. He has paid the penalty for that,” Srinath said.

The only Indian fast bowler to have taken more than 300 wickets in ODIs believes that the current crop of pacers comprising Ishant, Umesh Yadav, Varun Aaron and Mohit Sharma must be given more chances and time in the longest format of the game.

“It is not that easy to be consistent bowler in all the three formats of the game. Varun is the fastest and he will play a role in the Indian cricket. Umesh is also a good bowler. You have to give them more chance and time to play the longer version of the game. I think we have good Indian fast bowler,” he said.

[dropcap color=”#008040″ boxed=”yes” boxed_radius=”8px” class=”” id=””]T[/dropcap]he former pacer backed ICC’s decision to scrap the batting powerplay in ODIs and permit five fielders outside the 30-yard circle in the last 10 overs instead of three fielders, saying, “The rule change has brought the bowlers back into the main stream. The bowlers were totally lost in the last 3-4 years in the format. It has given some boost to come back into the game”. Srinsth believes India’s limited-overs captain Mahendra Singh Dhoni has another year or so to lead the attack.

“I see another year or so in Dhoni in the T20s and the ODIs. He has been a wonderful captain and brought so many laurels for the country. Even Kohli is succeeding for sure,” he said.

The legendary pacer advised youngsters to play all three formats of the game, but to give more emphasis on Tests which will keep them grounded and make them learn the ropes faster.

Speaking on the Red Bull Campus cricket World Finals 2015 which kicked off in Dehradun, Srinath said, “This is a new concept. If somebody is very successful here it gives him a strong knowledge of the game and can then take it forward in professional level.” 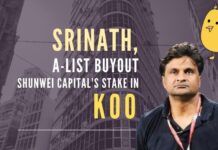 Viru calls it a day