Subhash Chandra sensed the first victory when Mukesh Ambani’s Reliance Group decided to call for an Rs.10,000 crore worth deal to take over the plan and supported the continuation of legacy in Zee Group. For the past few years, Zee Group was cash-strapped and facing financial problems and many were in talks for taking over Zee Group, the premier in India’s television sector. In the media industry, there were talks about industrialist Gautam Adani being in talks for the takeover of Subhash Chandra founded Zee TV Group. But still, the unanswered question is who is behind Invesco which rattled Chandra.[1]

“We also recognize that following the merger’s consummation, the board of the newly combined company will be substantially reconstituted, which will achieve our objective of strengthening board oversight of the company. Given these developments, and our desire to facilitate the transaction, we have decided not to pursue the EGM as per our requisition dated September 11, 2021,” it added.

Last year in December, Sony Pictures Networks India Pvt Ltd (SPNI) and Zee Entertainment Enterprises Ltd (ZEEL) signed definitive agreements for the merger of ZEEL into SPNI following the conclusion of an exclusive negotiation period during which both parties conducted mutual due diligence. At that time Invesco along with OFI Global China Fund LLC, which together hold about a 17.9 percent stake in ZEEL, had opposed the deal.

When the merger deal was announced in September 2021, the two networks had stated that Sony would invest USD 1.575 billion and hold a 52.93 percent stake in the merged entity, while Zee will have the remaining 47.07 percent. ZEEL’s chief executive Punit Goenka will lead the combined company as its Managing Director & CEO.

When it is completed, Sony Pictures Entertainment Inc will indirectly hold a majority of 50.86 percent of the combined company and the promoters (founders) of ZEEL will hold 3.99 percent, while the other ZEEL shareholders will hold a 45.15 percent stake. Two investment firms — Invesco Developing Markets Fund (formerly Invesco Oppenheimer Developing Markets Fund) and OFI Global China Fund LLC, which together hold 17.88 percent stake in ZEEL — had last year sought an EGM to remove Goenka and two independent directors Manish Chokhani and Ashok Kurien.

Invesco had opposed the merger plan with Sony, terming the development as symptomatic of the company’s erratic manner of handling important and serious decisions. In July 2019, Subhash Chandra-led Essel Group had roped in existing investor Invesco Oppenheimer to raise its stake in flagship Zee Entertainment Enterprises by another 11 percent for Rs.4,224 crore.

But now Subhash Chadra had the last laugh by controlling the Zee Group, by sidelining the warring largest shareholder. In a nutshell, veteran Subhash Chandra who knew well about all kinds of ‘Indian Jugad’ won in the game with faceless foreign investor firms. 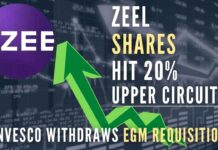 Three suggestions for lowering fuel prices at the pump