A Bill is in the making in the U.S. Congress which calls for a designated “Envoy” in the U.S. Department of State[1]. Don’t underestimate the main co-sponsors of this Bill-Reps. Ilhan Omar (D-MN), where I live, and Jan Schakowsky (D-IL). Omar’s checkered and controversial background was a subject of a recent article in this publication[2]. They have already gathered about 30 other House Democrats to go along (more about them in another article).

Omar is known to have anti-India, anti-Modi, anti-Hindu, and pro-jihad views and believes very firmly that Muslims in India are constantly under attack[3]. For example, she was perceived to be a strong backer of anti-CAA resolution in the Saint Paul city council. She has also openly criticized India for the revocation of Article 370 bringing Kashmir under one nation one constitution framework.

The monitoring of the acts of violence by Rohingyas to the local Buddhists in Burma won’t fall under the Bill either.

The Bill, if passed, will have far-reaching consequences for India and thus we must exert political influence and exercise all avenues of advocacy for the Bill not getting through. This should include India’s Ministry of External Affairs mounting its own diplomatic pressure. As a concerned Hindu but not an expert, I plan to offer what the Bill entails in a layman’s language and not legalese words. This is part 1 with some very basic analysis.

The countries cited in the press release where allegedly Islamophobia is practiced, or put it differently the Muslims are under attack, include Uyghurs in China, Rohingya in Burma, Muslims in India and Sri Lanka, and the countries where Muslim immigrants/ refugees have made their home[4]. These include but are not limited to many countries in Europe, the U.K., Canada, New Zealand, and Australia.

The Bill will decidedly have a deeper impact on India and target Hindus anywhere directly or indirectly. The main sponsor, Omar, passionately paints a picture that Islamophobia exists globally and she wants it “eradicated,” with an end to what she calls bigotry. The Bill is designed to monitor and combat acts of Islamophobia and Islamophobic incitement in foreign countries from the State Department. Imagine the unimaginable for India, particularly, as the long-overdue efforts are underway to build a new One-India.

The co-sponsors are making the pitch in the name of the U.S. commitment to international religious freedom (IRF) and human rights (HR) in the world (but not on U.S. soil). To put it differently, the Bill sanctions with impunity any acts of Hinduphobia and Hinduphobic incitement by anti-Hindu elements. Examples include the decades-old and well-documented practices of killings and atrocities against Hindu families, homes, and places of worship in Islamic nations like Pakistan, Bangladesh, and Afghanistan. The monitoring of the acts of violence by Rohingyas to the local Buddhists in Burma won’t fall under the Bill either.

The Bill would ignore what Muslims do to other religious minorities, and even the majority Christians in the context of IRF and/ or HR. Just imagine, how Islam is destroying a civilization like France. It is a classic case where a mosque is created and a church disappears every two weeks. Reportedly, “In 2050 we (France) will be a half-Islamic country, in 2100 we will be an Islamic republic.[5]”

There are cities in many European countries and the U.K. where the Muslims have become the majority with the steady exodus of the local Christian population. What they have done is create havoc on a day-to-day basis like the use of loudspeakers for broadcasting prayers. Friday prayers held in the open on streets blocking traffic and making other things unpleasant and harassing on a daily basis force others to leave for their peace of mind.

Imagine, who will be the special envoy? The envoy does not have to be a career diplomat who understands objectivity, impartiality, and diplomacy. It is more likely that the envoy will be a political appointee influenced by no other than Omar. She will love to find a replica of her own but there are not that many women like her and therefore it is likely to be a male, one of many who have already infiltrated the Biden administration.

Under affirmative action, discrimination based on gender, age, and ethnicity is not permitted but I am afraid that the appointee is likely to be a male with a demonstration of full faith and trust in Islam. Who else may be considered? Anyone with a demonstrated anti-Hindu characteristic such as an academic actor from the Dismantling Hindutva conference. It should not surprise anyone if a strong Hinduphobic is not only an envoy but a “mole” in the State department exerting a great deal of influence on foreign policy.

We will focus on other aspects of the Bill in the next part and why the functions of the proposed Bill i.e., the monitoring and combating cannot be accomplished under the aggies of existing U.S. government agencies.

[1] Ms. OMAR introduced the following bill; which was referred to the Committee – Omar House

[2] Who is Ilhan Omar, author of Islamophobia Bill? Sree Iyer explains the controversies around her – Oct 25, 2021, PGurus.com

[5] France to Vote on the Great Replacement of Western Civilization – Oct 17, 2021, Gatestone Institute 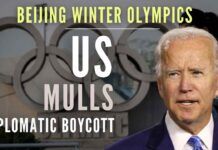 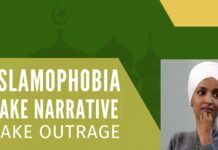 Why is Ilhan Omar silent on racist attacks on a Buddhist in Sialkot & on Jews celebrating Chanukah?

The Chicago Anti-India Dragathon and our Pushback