An ideal Opposition would have been the one while appreciating the victory registered by the BJP waiting in silence for the right moment to strike.

A dedicated, devoted and disciplined lot. That’s the overall picture about the new breed of lawmakers elected to the 17th Lok Sabha in the recently held General Election. The discussion on the motion of thanks to President Ram Nath Kovind’s address to the joint session of both the Houses which culminated on Wednesday with Prime Minister Narendra Modi systematically demolishing the charges levelled by the Opposition against his government.

The young parliamentarian who caught the public attention was 28-year old Tejaswi Surya, the newly BJP elected member from Bangalore South. In his maiden speech, he reminded us of the stylish Karnataka cricketer Gundappa Viswanath, popularly known as the Little Master, who enthralled audience around the world with his stylish batting.

Surya was honest enough to admit his humble background, that of a middle-class family in Bangalore. But his speech was fiery and passionate and he did not hide his dream and passion to see a new, modern and vibrant India under the leadership of Prime Minister Modi. This is the young man to watch in the future. If he has his foot firmly attached to the ground, I’ll not be surprised to see Surya in the role of Karnataka Chief Minister or Indian Prime Minister in another three decades.

But being in the Opposition is a Big Responsibility. The GOP and the DMK are thoroughly unprepared for the same.

Mahua Moitra, the banker-turned Trinamool Congress MP is the ideal person to be the face of Mamta Banerjee in Lok Sabha. She set all civilities aside and gave a mouthful to the ruling party much to the glee of her godmother sitting at Kolkata. Mahua would be the person to watch from the Opposition benches in the coming years. The Union Minister for Information and Broadcasting Prakash Jawdekar owes the nation a reply to Mahua’s allegation that “the government has employed over 120 persons to monitor anti-government stories”.  The charge takes the hear off from the often repeated allegation by her Didi that not a single job has been created in India during the first five years of the Modi Government!

It’s sad that the person selected /appointed by Sonia Gandhi to be the leader of the Congress Party in the Lok Sabha is no different from Mallikarjun Kharge and even worse than him. Much was expected from this Bengali Babu but his speech was no better than that of a speaker in a street corner meetings held by the CPI-M. “Actually @adhirrcinc your knowledge of Hindi is pretty good. You thought of নোংরা নর্দমা in Bangla and correctly translated it to गंदी नाली (gandi nali) or dirty drain. It was good of BJP to shut its doors on your face when you came crawling and pleading,” tweeted Kanchan Gupta,  veteran political commentator, about the speech by Adhir Ranjan Choudhury, the Congress Floor leader who initiated the discussion.

Actually @adhirrcinc your knowledge of Hindi is pretty good. You thought of নোংরা নর্দমা in Bangla and correctly translated it to गंदी नाली (gandi nali) or dirty drain. It was good of BJP to shut its doors on your face when you came crawling and pleading. https://t.co/iXWZRGLK9q

Chowdhury’s speech was dull and drab and one really felt the absence of a person like Jyotiradithya Scindia in the House. Chowdhury may soon end up as a Mani Shankar Aiyer or Sasi Tharoor, loudmouths.

P K Kunhalikutty, the Muslim League leader from Kerala, who was an accused in flesh trade while he was the minister for industry in the State, shocked everybody in the House by his words. Kunhalikutty, infamous for his hatred for Hindus, began his speech by cursing Narendra Modi’s three-week-old government that it would be the last win of the BJP and the victory registered by the Hindutva party was a default. It is an open secret that  Muslims like Kunhalikutty personally hate Narendra Modi. But by cursing the newly formed government, this Muslim fanatic leader was exposing himself as well as his community and their ulterior plans. In a civilised society, the norm is that the loser would always extend his wishes and congratulations to the winner, with the rejoinder that the former would challenge the champion again. Through his speech of three-minute duration, Kunhalikutty burnt the bridge with the government once and forever. He is no role model for aspiring politicians.

What caught the attention in the opening days of the Lok Sabha was the collection of Malayali MPs who had usurped the prime position/seats behind that of Sonia Gandhi and Rahul Gandhi so that they would be visible all over the world where the proceedings of the House are beamed Live. But these lawmakers forget the fact that they look so awkward when they yawn and doze off. Sashi Tharoor, the playboy MP of the Congress stole the limelight by his opposition to the Triple Talaq Bill moved by the Government. He is the ideal person to oppose the Bill because he is known in Kerala as Kalyana Raja (the King of Marriages) having wedded and divorced/ removed many a ladies from his life. Prime Minister in his reply to the discussion set the cat among the pigeons by reminding the House about the statement made by a former Congress minister that “it is not the responsibility of the Congress to lift the Muslims of the country from the gutters they are in”. The Opposition Congress is yet to recover from the shocking disclosure made by the Prime Minister while winding up the discussion. The sad reality is that there are no voices in the Opposition Benches of the Lok Sabha as on today to take the Government by the horns. The likes of  Mahua Moitra may get attention because of sheer ling power. While accusing the BJP government of mob lynching, the Trinamool Congress MP maintained silence about the dozens of BJP workers who were massacred by the goons of her party. She was also silent about the TOLABAJI TAX extorted by the Trinamool bosses of Bengal.

An ideal Opposition would have been the one while appreciating the victory registered by the BJP waiting in silence for the right moment to strike. The speech of Dayanidhi Maran, the Amul Baby of the DMK, was one jampacked with hypocrisy and lies. Maran accused the AIADMK government in Tamil Nadu of massive corruption forgetting the fact that he himself is a prime accused in the illegal telephone exchange case which is being heard by a special court in Chennai. Two prominent figures of the DMK in the Lok Sabha are accused in 2G Spectrum Case and the day is not far off when we hear that they would be trooping to the Tihar Jail. As on today, there is no such thing as “perfect crime”.

The DMK and the Congress may have to play all their cards to stay relevant in the 17th Lok Sabha. Chowdhury and Maran would not be able to lead and sustain the attacks on the government because one needs to be a brilliant lawmaker to shine as a leader of the Opposition. All that the treasury benches require is a sense of understanding and discipline. But being in the Opposition is a Big Responsibility. The GOP and the DMK are thoroughly unprepared for the same. 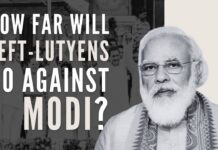 Some notable Reform Programs of the Modi Government and the impact...