In one of the largest-ever stock disposals by a chief executive, tech billionaire Elon Musk sold roughly $6.9 billion worth of Tesla stocks this week over a period of several days.

The Wall Street Journal reported that a regulatory filing was made public late Friday which states that the Tesla CEO sold 1.2 million shares on Friday, worth more than $1.2 billion. These sales came on top of more than $5.6 billion worth of stock sales earlier this week.

Recently, a report said that initial filings in the US showed that Musk had sold 934,091 shares for about $1.1 billion, out of more than 2.1 million options he received as part of a compensation package.

The filings that were posted later on Wednesday with the US Securities and Exchange Commission (SEC) showed that Musk sold another 3.58 million shares in Tesla. That sale was valued at about $4 billion.

Earlier this week, Elon Musk took a poll on Twitter. He had tweeted, “Much is made lately of unrealized gains being a means of tax avoidance, so I propose selling 10 percent of my Tesla stock.”

Within minutes of his first tweet, he again tweeted, “I will abide by the results of this poll, whichever way it goes.”

Nearly 58 percent of Elon Musk’s followers who participated in his Twitter poll told him to sell 10 percent of his stock (worth $24 billion) in the electric car company, ostensibly to pay more tax. 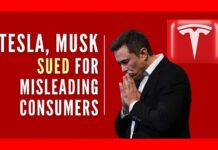