Now the controversial multinational NGO Amnesty International has shut shop in India after the agencies caught them for several violations including the prevention of money laundering rules. It is already reported by the website Great Game India about Amnesty’s links with British intelligence agencies and how the NGO was used to penetrate into many countries through the garb of human rights and charity works[1]. In India, the London based Amnesty used many pliable journalists to operate in India through dubious ways by floating commercial firms and money routed for commercial purposes.

How did Amnesty enter India?

Was it with the help of pliable journalists and activists?

In 1990, Amnesty tried to enter India citing human rights in Kashmir during the V P Singh regime. Those days the then Opposition leader Rajiv Gandhi opposed it, citing the dubious operations of the agency and its links with British spy agencies. Somehow Amnesty got its India operations started and got clearance to accept foreign contributions in 2000. For accepting foreign contributions, the NGO needs clearance from the Union Home Ministry under FCRA (Foreign Contribution Regulation Act). Later many times the FCRA clearance was denied as many complained about the dubious role of the agency. Then came the fraud of the London-based NGO.

First in June 2013, in Bangalore, a commercial firm was registered as a company by the name Social Sector Research Consultancy & Support Services (India) Private Limited. This firm changed the name to Amnesty International India Private Limited, in June 2015. All the frauds including money laundering were caught by Union Home Ministry only in June 2019, leading to the registration of a case by the Central Bureau of Investigation (CBI) and Enforcement Directorate (ED).

The investigation found that Amnesty International (UK) works in India through four entities in a dubious manner. None of them obtained an FCRA license to accept foreign contributions. These are the four entities:

Amnesty also formed another private company in Delhi address with just Rs. One lakh capital in May 2015 with the name – Amnesty International South Asia.

Meanwhile, the first financial fraud happens in September 2015. First London Headquarters of Amnesty delivers Rs.10 crores to the Bangalore company as Foreign Direct Investment (FDI). How this fraudulent transfer was treated as FDI is another question. What was Reserve Bank of India, under then-Governor Raghu Ram Rajan doing? What about the Finance Ministry? These questions are still unanswered.

Next, after getting Rs.10 crores as FDI this company pledged this money as a deposit and obtained Rs.11.40 crores as Overdraft to another Trust – Indians for Amnesty International Trust – from Kotak Mahindra Bank!

Another interesting thing was this company’s (Amnesty International India Pvt Ltd.) more than 99.9% of shares (9980 shares) were held by a Trust called Indians for Amnesty International Trust. The rest of the 10 shares each were held by two activist ladies – Shobha Mathai and Nandini Anand. Later shareholding pattern changed to three shareholders – Amitabh Behar (currently heading Oxfam), Harish, and Ramacharan Das. All these people were journalists and NGO activists air-dropped along with London-based institutes. The shareholding pattern continued to change with new-new shareholders from the same category of people like Minar Vasudeva Pimple, Anant Hapadmabhawan Guruswamy, and Brij Patnaik. At present, the shutdown company has two Directors – Amitabh Behar (currently CEO of another foreign NGO – Oxfam) and Manoj Mitta (former journalist of Times of India).

ED’s probe shows that money was flowing to this company in so many ways that up to Rs.100 crores came in from London showing as commercial consultancy fee and service contracts, website maintenance contracts, etc. The agencies say a block of Rs.26 was landed in the Indian company based on invoices for service contracts.

Meanwhile, Amnesty also formed another private company in Delhi address with just Rs. One lakh capital in May 2015 with the name – Amnesty International South Asia. Current Directors of this Delhi based company are Biraj Patnaik (also Executive Director of NFI – National Foundation for India which is also getting all kinds of foreign donations), Minar Vasudeo Pimple (also a shareholder in a Bangalore company), and Meenu Vadera. All three are professional activists linked to many NGOs, managing a lot of foreign donations from many multinational NGOs and Corporate CSR Funds.

The question is when is CBI, ED, and Union Home Ministry cracking the whip on the persons behind these NGOs involved in getting foreign funding illegally? 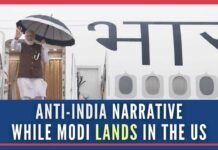 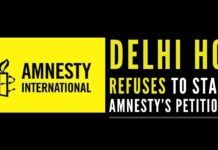