Why is the situation so bad in AMU that regular & surprise checks had to be conducted to ensure that anti-national conduct was not being pursued?

Ever since the controversy over MA Jinnah’s portrait has erupted, supporters of Aligarh Muslim University have been taking pains to underscore the ‘nationalist’ credentials of the institution, pointing out that the university had given the country many eminent freedom-fighters and academics. This is of course true. But there is also a flip side which AMU apologists have been less eager to acknowledge.

In April 1977, a bunch of AMU students led by Mohammad Ahmadullah Sadiq founded the Students Islamic Movement of India (SIMI), The slogan the outfit adopted left no one in doubt about its intent early on: ‘Allah is our Lord, Quran is our Constitution, Mohammad is our leader, Jihad is our way, Shahada is our desire’. Thus, an organisation which was later to be repeatedly proscribed — it remains banned today — was the brainchild of some AMU students. There is nothing on record to suggest that the institution took any great offence at the development. Instead, it, like many other ‘secularists’ in the country, looked the other way and chose to get misled by SIMI’s hollow claim of being an innocuous body established for the welfare of Muslim youth.

AMU students (of Kashmiri-origin) had organised a silent march in 2013 in the institution’s campus against the hanging of terrorist Afzal Guru.

SIMI’s hardline position became further known when it protested against the visit of Palestine Liberation Organisation leader Yasser Arafat to India in the early 1980s, claiming that he had sold out to the West. Around the same time, SIMI also whole-heartedly supported the radical Iranian Revolution led by Ayatollah Ruhollah Khomeini. Such was SIMI’s extremism that the Jamaat-e-Islami Hind, its parent body and itself not known for moderate opinions, got uncomfortable, leading to the youth body’s separation from the Jamaat.

While SIMI continued to grow in Uttar Pradesh and later in western and southern parts of India, the foundation had been laid by AMU students. SIMI rejected the concepts of secularism and democracy as being antithetical to Islam, believed in the establishment of a Caliphate and emphasised on a holy (and violent) war to restore Islamic rule. Soon, its ugly face became too evident for the ‘secularists’ to ignore any longer. The organisation was banned for the first time in 2001, then twice again. Although the third ban was lifted by a Delhi High Court tribunal in August 2008 on the basis of “insufficient material” provided by the Government, it was restored immediately after, by the Supreme Court. Meanwhile, SIMI’s links with Indian Mujahideen had become public knowledge.

In September 2000, an Intelligence Bureau officer Rajan Sharma, who was on investigative duty at AMU, was locked up in a hostel room in the campus by students of the university and brutally assaulted. According to medical reports, Sharma suffered a broken jaw and severe torture. The officer was on a surprise visit to the campus to keep a watch on possible anti-national activities. AMU students, far from being apologetic for the brutality they had unleashed, claimed that the officer should have given prior notice of his arrival. Why? So that they could quickly hide material that incriminated them or their colleagues in anti-national or anti-social activities?

AMU students (of Kashmiri-origin) had organised a silent march in 2013 in the institution’s campus against the hanging of terrorist Afzal Guru. They distributed pamphlets titled, ‘Justice Hanged’, and made it known that they were in agreement with the larger ‘break India’ gang which operated out of Delhi’s Jawaharlal Nehru University. They even offered namaz for the hanged terrorist at the Maulana Azad library. The deeply nationalist Maulana must have turned in his grave. Neither the other ‘nationalist’ students of the institution nor AMU’s administration did much to prevent and later contain this anti-national outburst.

Why is it that while BHU has no taint of anti-nationalism, AMU has had to grapple with sordid happenings?

These are not stray incidents. In 2016, AMU had to expel a Kashmiri student, Mudassar Yousuf, after he posted scurrilous comments on Indian soldiers in the wake of the terror attack in Uri of Jammu & Kashmir. The university yet again axed another Kashmiri student of geology, Mannan Bashir Wani, after he reportedly joined the terror group, Hizbul Mujahideen. Later, the faculty at AMU, led by the geology department, ‘appealed’ to Wani to give up the gun and return to the mainstream. It almost seemed that the university was apologetic about the whole affair. Of course, the AMU administration later put out a statement that the university followed a ‘zero tolerance’ policy towards anti-national activities.

That being the case, what explains the environment in the campus which breeds such anti-nationalism? Why is the situation so bad that one of its Vice Chancellors, Tariq Mansoor, had to direct wardens and provosts to conduct regular and surprise checks of their respective halls and hostels to ensure that anti-national conduct was not being pursued? There cannot be any denying that AMU has become a breeding ground of militant radicalism, even if not in enormous proportion for now. The support for Jinnah and opposition to India’s President is but one manifestation of this mindset; backing terrorists like Afzal Guru and refusal to organise the birth anniversary of a Hindu king who had donated land for the institution is another.

AMU became a Central University by an Act of Parliament in 1920. Four years before, the Benaras Hindu University was established. While the first was supposed to be a secular institution with an Islamic flavour, the BHU too was to be secular with perhaps a Hindu touch. At any rate, both were expected to be centres of excellence in education and to work for the larger good of Indian society. Why is it that while BHU has no taint of anti-nationalism, AMU has had to grapple with sordid happenings? It’s food for thought. 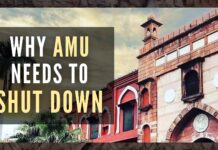 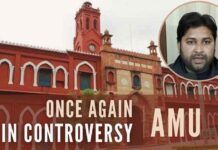