Yesterday was just the culmination of the surrender that began on Dec 14, 2019.

Even as the apologists are out to defend the indefensible, it is important to state what must be stated, because words are immortal, and someday they may reach the people who may actually act on them.

No, Modi-Shah should not be blamed for not massacring the thugs yesterday. “No bullet” was the correct and only sensible option.

But did yesterday spring on you suddenly? It was actually the culmination of a long incremental surrender on your part.

Mr Modi and Mr Amit Shah, please note that this is not a country with one religion, with one language, and one ethnicity. If you are seen submitting to violence, you will not only not be able to pass any laws, you won’t be able to even govern it.

Capitalism is about efficiency and effectiveness. Japanese firms keep inventory stocks to last only a couple of hours to minimise the cost. Why? because they are so sure of the supply chain.

The four groups– Muslims, Christians, Leftists, and Khalistanis – totalling almost 40% of the population, want to positively dismantle this country. Only their inability is keeping them from doing so, not any feelings for the country or for the remaining 60% human beings who have done no harm to anybody, who are here since time immemorial going about their lives. Whenever you try to do anything that is remotely good for the country, these four groups will oppose it. Because if the country gets stronger, it will be so much more difficult to dismantle it. And even 60% are not far from 40% when it comes to stupidity. Uddhav Thackrey needs an emotional issue to keep people in thrall. He has zeroed in on Marathi speaking areas of Karnataka[1]. It is only a matter of time before Marathi Hindus and Kannada Hindus start killing each other to keep Uddhav Thackrey and his brood in power.

Shaheen Bagh was the beginning

Red Fort saga was just the culmination of the surrender that began on Dec 14, 2019. Why did you allow Shaheen Bagh to continue beyond the first few hours? Why? Ask the police officers, they would tell you that they can clear any roadblock or dharna without killing anybody. Just tell them and see how they do it. You can ask for the live feed from the site. What exactly did you expect? That they will block the road, ask you to take CAA back, you will say no, and they will say oh sorry, we did not know that you would say no, we are going home? How can you allow a road to be blocked by a mob? And if you allow one mob, as I explained above, you will soon see that there are mobs on every road.

Common people are not always able to know what is best for them. Bengal, the richest state in 1947, now sees that of all the girls trafficked in India, 50% come from Bengal alone[2]. Because the Left has totally finished its economy. Its people are now trading in women. Still, they continued to vote for the Left for 34 years and then voted for a leader more left than the Left. Who are you responsible for? To the girls that are trafficked or to the leader who can kill the opposition, literally?

Of all flawed models…

Capitalism is about efficiency and effectiveness. Japanese firms keep inventory stocks to last only a couple of hours to minimise the cost. Why? because they are so sure of the supply chain. Compare that with what you are running. Your capital Delhi, not some corner in Kalahandi. Forget about goods, can a man starting on time from his home in Delhi expect to reach his office on time? Or even reach at all? How can you expect any commerce in this country?

The Big Dhoka that Xi was

All your meetings with Xi Jinping could not keep you safe. You were saved by the army that you could equip because commerce, however slowly, still flows in this country. The commerce to create which through reforms men before you staked their governments.

Coming to government, you are able to construct the Ram temple in Ayodhya ONLY because a man did not worry about his government, his image in Lutyens or the “international” fall out. Vajpayee stood to face the entire west and tested the nukes[3]. He staked his government to discontinue the pension, and to open telecom and petroleum sectors[4].

There is no way 135 crore human beings can survive without a free market economy. Socialism in this country has its beneficiaries and they have money. And allies in the four groups I mentioned above. If you try consensus or refuse to act against mobs, you won’t be able to liberalise, and without liberalisation entire country will soon start trafficking girls at the rate Bengal is doing now.

And no human beings can live before or after death with the curse of a girl. 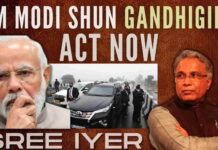 AGE IS JUST A NUMBER