The normally eloquent Finance Minister (FM) Arun Jaitley seems to have lost his voice over the expose of his daughter Sonali Jaitley’s law firm’s link with the Punjab National Bank (PNB) scam-tainted Gitanjali Gems Limited.  First, a pre-emptive article appeared in OpIndia[1] that The Wire is going to do hit-job journalism on Jaitley’s daughter. After this, The Wire[2] comes out with the story that the law firm Chambers of Jaitley and Bakshi, now run by daughter Sonali and husband Jayesh Bakshi accepting that they engaged legal services contracts with fugitive Mehul Choksi’ firm and returned their contracts.

It is a known secret in the legal world that a Retainership Fee is a euphemism for huge sums given by Corporates to powerful politicians-cum-lawyers or their kin.

Then came the accusation by Congress President Rahul Gandhi. In a scathing attack, Rahul said that CBI should raid Jaitley’s daughter’s law firm:

It’s now revealed that our FM’s silence on the PNB SCAM was to protect his lawyer daughter, who was paid a large retainer by the accused just a month before the SCAM became public. When other law firms of the accused have been raided by the CBI, why not hers? #ModiRobsIndia https://t.co/As9y9Dv0RZ

Still, Arun Jaitley has gone into mute mode. The FM has no qualms wading into matters of Defence (the FIR  that his alleged protégé approved against an Army Officer) during his video conversation with Navika Kumar for ETNow on the 2018 Budget[3]. Then why the silence on a matter that is so close to home? What is he trying to hide? According to the daughter’s law firms’ reply to The Wire, they were engaged by the tainted Gitanjali Group in December 2017 and returned the contract as soon as the news item appeared about the bank scam.  Arun Jaitley’s daughter, her husband, and son are not legal eagles by any stretch of the imagination and are not that visible in any courts.  Then why did the fugitive Mehul Choksi approach them? At the risk of stating the obvious, the only answer one can arrive at is that their father is the country’s Finance Minister.

Though uncle Mehul Choksi’s dealings were doubtful from 2014, his activities came into the public domain only after his nephew Nirav Modi got exposed. All escaped during the first week of January 2018. Punjab National Bank filed a complaint to CBI on January 29, 2018, and a First Information Report (FIR) was registered the next day. As per the FIR, the bank frauds started from January 2017.

How much was the legal fee or retainership fee paid by the Gitanjali Group to engage daughter Sonali Jaitley’s firm? Arun Jaitley must explain as to why a tainted firm approached his daughter’s legal firm. Is this a one-off legal contract with them or were they engaging Sonali’s firm before too? The Bharatiya Janata Party (BJP) leaders made a hue and cry[4] over Congress leader Abhishek Singhvi’s wife’s firm being a shop owner of Nirav Modi’s showroom in Mumbai and wife’s purchasing discount on diamonds.

What is interesting about this is that the allegations were leveled by the Defence Minister Ms. Sitharaman, who will hit an InstantMute button if asked about the FIR she approved, in her own ministry! Mr. Modi, what is wrong with your cabinet members? If they can’t speak for their own department, what gravitas do you think they will have with the readers/ viewers when they wade into other ministry matters? Surely, if Jaitley had spoken about the PNBScam sooner to the media, the fallout could have been contained. Was the contract of his daughter’s legal firm the reason for his silence?

It is a known secret in the legal world that a Retainership Fee is a euphemism for huge sums given by Corporates to powerful politicians-cum-lawyers or their kin. Why are Corporates paying such a huge fee, which looks like a hafta payment to VIPs or their kids? Is this a glorified kickback to look the other way?

Finance Minister Aun Jaitley must clear the air. He can’t act like an Ostrich on this exposé of tainted companies engaging in legal contracts with his daughter’s firm.

[1] After Amit Shah and Ajit Doval, is ‘The Wire’ planning to target Arun Jaitley and his daughter with a shabby hit job? Mar 9, 2018, OpIndia.com 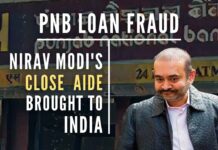 Anybody else in Vadra’s place would be…