Years, after the misleading data were incorporated into economic policy and harm was done, Subramanian comes up with his revelation. This is nothing but WAR-mongering

R.Vaidyanathan, a prominent economist, coined an interesting acronym WAR, Wisdom After Retirement, some time ago. Talking to PGurus, he was pointing out that top bureaucrats write “pompous articles” in newspapers after retirement as to how to improve the education system and reform the financial sector. However, the very same officials, when in office, do nothing of that sort, even when they hold responsible positions. Former chief economic adviser (CEA) Arvind Subramanian has recently joined the club of WAR-mongers.

In an article in The Indian Express (June 11), Subramanian wrote about research he just carried out: “My results indicate that methodological changes led to GDP growth being overstated by about 2.5 percentage points per year between 2011-12 and 2016-17, a period that spans both UPA and NDA governments. Official estimates place average annual growth for this period at about 7 per cent. Actual growth may have been about 4.5 per cent, with a 95 per cent confidence interval of 3.5 to 5.5 per cent.”

When Subramanian was CEA, demonetization was announced by Prime Minister Narendra Modi on November 8, 2016. Subramanian didn’t say anything at that time

On the face of it, this is a fair remark: the overstated growth figures are equally shared by both the previous United Progressive Alliance and the incumbent National Democratic Alliance. He is not being politically partisan. But then neither his fairness nor his scholarship is in question; the issue here is his moral courage.

Here is a man who studied at St Stephen’s College, Delhi, the Indian Institute of Management, Ahmedabad, and the University of Oxford, and worked as an assistant director in the Research Department of the International Monetary Fund. He was Chief Economic Adviser to the Narendra Modi government for four years (2014-18). Despite his stellar academic record and his four-year experience from the vantage point of CEA, he could not even see, let alone rectify, statistical bungling. It is only after having demitted the high office that he was blessed with such a revelation! Veritable WAR indeed!

In the article, he has answered the question why now: “Finally, the question will arise as to my role on this issue while I was CEA. Throughout my tenure, my team and I grappled with conflicting economic data. We raised these doubts frequently within government, and publicly articulated these in a measured manner in government documents, especially the Economic Survey of July 2017. But the time and space afforded by being outside government were necessary to undertake months of very detailed research, including subjecting it to careful scrutiny and cross-checking by numerous colleagues, to generate robust evidence.”

But was just raising doubts frequently within the system and publicly articulating them “in a measured manner in government documents” enough? Is the job of the CEA just to write Economic Survey every year which few politicians of consequence read anyway? Isn’t he or she supposed to advise, admonish, and warn the powers that be about policy matters? To use Left-liberals’ pet phrase, isn’t he or she supposed to speak truth to power?

When Subramanian was CEA, demonetization was announced by Prime Minister Narendra Modi on November 8, 2016. Subramanian didn’t say anything at that time. Two years later, however, he enlightened the world about the devastation it caused, calling it a “massive, draconian, monetary shock.” He also hinted that he was not in the loop.

While resignation over demonetization might have been an act of ingratitude, having done little to sound the government to refrain from inflating GDP numbers during his tenure is not understandable. Especially, as he himself wrote in the recent article, “Growth estimates matter not just for reputational reasons but critically for internal policy-making. The new evidence implies that both monetary and fiscal policies over the last years were overly tight from a cyclical perspective. For example, interest rates may have been too high, by as much as 150 basis points. The Indian policy automobile has been navigated with a faulty, possibly broken, speedometer.”

Years, after the misleading data were incorporated into economic policy and harm was done, Subramanian comes up with his revelation. This is nothing but WAR-mongering. With Abhijit Iyer-Mitra on New Axis evolving in Middle east 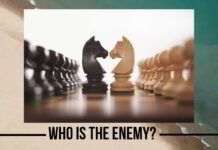 Who is the Enemy? 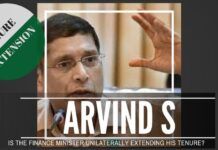 Has the FM unilaterally decided to extend the tenure of the CEA?