Three days after the Pollution Control Board (PCB) Assam issued a complete ban on firecrackers ahead of the Diwali festival in the state, the Chief Minister of Assam Himanta Biswa Sarma on Monday said that the decision had been taken without “any consultation” with the government and it will be reviewed keeping “people’s sentiments in mind”.

Assam Chief Minister Himanta Biswa Sarma publicly criticized a Pollution Control Board (PCB) notification banning the bursting and sale of all kinds of firecrackers except green crackers during the festive season.

The Chief Minister on Monday evening tweeted: “Assam Pollution Control Board has, reportedly, suo-motu, without any consultation with Govt, issued an order banning the sale of firecrackers & other restrictions. We’ve taken note of this. The entire issue is being reviewed afresh, holistically, keeping people’s sentiments in mind.”

Assam Pollution Control Board has, reportedly, suo motu, without any consultation with Govt, issued an order banning sale of firecrackers & other restrictions.
We’ve taken note of this. The entire issue is being reviewed afresh, holistically, keeping people’s sentiments in mind.

The PCB on Friday issued the notification imposing a ban on the bursting and sale of all kinds of firecrackers except green crackers in Assam during the festivities.

The notification said that in compliance with the directions of the National Green Tribunal, only the green crackers can be sold and bursting is allowed only for two hours during Deepavali festivals from 8 p.m. to 10 p.m., during Chhath Puja from 6 a.m. to 8 a.m. and during Christmas and New year eve from 11.55 p.m to 12.30 a.m.

Other than the specified festivals, prior permission of the concerned Deputy Commissioners of the districts would be required for use of only green crackers for a limited period (not more than two hours) in the state, said the notification, issued by state PCB Member Secretary Shantanu Kr Dutta.

It said that the notification was issued considering the fact that the bursting of firecrackers releases copious amounts of harmful chemicals, which have a severe impact on the respiratory health of vulnerable groups and such pollutants can further aggravate health conditions of COVID-19 positive persons besides person staying in home isolation.

The board has asked the District Magistrates and Commissioners, Superintendents of Police to implement the PCB directions and daily action taken reports to be submitted to the board.

The PB notification referred to the Air (Prevention & Control of Pollution) Act, 1981.

The PCB had announced a similar ban in Assam last year following NGT guidelines. Sarma, who was then the state’s health minister, had said that the government had not planned any restrictions on the use of firecrackers during Diwali. “Like any other religion, Hindus have the right to celebrate festivals. With improvement in COVID-19 situation in Assam, we plan no restrictions on the celebration of Diwali including use of Firecrackers,” he had tweeted. 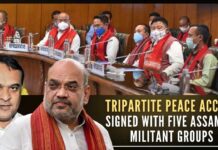