The bank’s managing director and chief executive Chandra Shekhar Ghosh told IANS in an interview that, “at present, our total business including liability and assets stands at Rs.27,000 crore($4058 Million). We are looking at a 30 percent growth by this fiscal-end.”

They started the banking operation in August last year, it has garnered over Rs.11,000 crore ($1653 Million) in deposits so far. Of this, around 21 percent comprises low cost savings and current account deposits and the focus has been on liabilities side.

Most of the term deposits are of one to three year tenure.

“We also looking at 30 percent growth of deposits by end of next March,” said Ghosh, who rose to the present position after working in his father’s small sweet shop in Agartala, before starting the micro-finance company in 2000.

He said the bank had got good responses so far from the depositors and almost 33 percent of the funds had come from retail depositors.

“Our focus will remain on the doorstep services, as also on building relations with depositors and customers, as a strategy to garner more deposits and increase business volume,” the bank’s founder said how the targets will be pursued.

The bank, with a capital base of Rs.3,200 crore ($481 Million) and a healthy capital adequacy ratio of nearly 40 percent, has extended its branch network to 656 across 27 states. It plans to further increase it to around 750 by March end, 2017, he said.
On lending, the bank’s total advances stood at Rs.15,000 crore($2254 Million). New lending channels like home loans, car and two wheeler loans, small and medium business loans have also been opened.

[dropcap color=”#008040″ boxed=”yes” boxed_radius=”8px” class=”” id=””]I[/dropcap]”n terms of lending to new channels, we plan to focus and operate in a segment where borrowers normally do not get funding from other banks. Since there is more risk involved in this segment, we are taking more time in scaling up our lending programme in new channels,” Ghosh said.

At the beginning of the banking operation the Kolkata-based private lender had Rs.8,500 crore($1277.66) of high-cost loans on its book, borrowed from other banks for microfinance operations. “We’ve repaid Rs.5,000 crore ($751Million) and will repay rest of the high-cost loans within next one year.”

The Reserve Bank of India (RBI) had given a special permission to the bank to carry its high-cost loans on its book. Before becoming a bank, as microfinance institution, Bandhan used to borrow from banks at an average 12-14 percent rates.

[dropcap color=”#008040″ boxed=”yes” boxed_radius=”8px” class=”” id=””]S[/dropcap]ince the West Bengal-headquartered lender is able to access public deposits, the cost of funds seems to have come down. This, in turn, is likely to translate into its lending rates. Bandhan Bank’s base rate is now at 12 percent, which is relatively higher than other banks.

“We will likely take a decision in this month (April) on our base rate, to see whether we can reduce it or not,” he said. The central bank’s monetary policy for this fiscal, in which the short-term lending rate has been cut, should help Bandhan in this regard.

“The base rate of a bank depends on the operating cost and cost of procuring funds. Our operating cost as a new bank is relatively higher than other banks. The risk premium in segments we operate in is also high. All of that reflects in our base rate,” Ghosh said.

“But we will definitely review our base rate.” 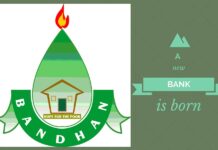