The British Broadcasting Corporation (BBC) has gone astray, again! On Sunday, a young British Student, James Yucel, started a campaign on Twitter on Sunday, @defundthebbc, which has crossed over 50,000 followers in under 48 hours. #defundthebbc has gained momentum, since the BBC’s false and insensitive reporting when it categorized the London riots as “largely peaceful” despite injuries to police officers, including one officer who fell down from a horse and was seen to be severely injured. The BBC lists out five of its public purposes[1], of which the following two are noteworthy: “To provide impartial news and information to help people to understand and engage with the world around them” and “To reflect the UK, its culture and values to the world.” Discerning readers will be amused at the impartial claim, considering the BBC’s inglorious record of classifying terrorists as gunmen[2], Pakistani grooming gangs as Asians[3], and ignoring the role of Palestinian terrorists in Israel[4].

If the BBC truly believes in their content and viewpoint, why not test it out via market forces and let the British public decide if they wish to pay for it?

The public and the press have not taken kindly to their latest misrepresentation, with both local media and politicians being vocal in their displeasure[5]. At the root of the troubles is the very nature of the organization’s setup, which is a combination of establishment support (Lutyens equivalent for our Indian readers), government largesse, and fleecing the public in the form of mandatory license fee[6].

By no means is the BBC a lean not for profit organization, as is often falsely claimed. The latest executive board compensation was £4.95 million, with the Director-General Tony Hall’s pay circa £450,000. The 75 TV news anchors were paid an annual salary of over £150,000, with some anchor’s pay exceedingly well over a million pounds. (Chris Evans of BBC Radio 2 was paid circa £1,250,000 for 2018/19). To add to the wonderful compensation benefits, the BBC also has a grand Company Pension Scheme (Defined Benefit), valued at £530 million as reported in its latest financial reports.

More pertinently, how does the BBC earn its income? For 2019, out of a total income of £4,889 million, 75% (£3,690 million) was obtained from license fees. Readers may be shocked to note that all TV users in the UK have to pay a mandatory license fee, irrespective of whether they consume the BBC or not! If you own a TV, you must pay £157.50 in license fee to the BBC annually!

In what would make the erstwhile robber barons proud, the BBC actively prosecutes citizens for the nonpayment of license fees. In 2018 alone, 130,000 individuals were prosecuted and the BBC has strongly encouraged the criminal sanctions to remain in place[7].

It’s silly to assume that Britain is a monolith – a multi-ethnic and multi-racial nation of 65 million people is bound to have diverse views – and for the BBC to shove down its values and leaning at the expense of public funds is plain extortion.

It is no wonder that the entrenched established media outlets feel threatened by social media and alternative news outlets which are more representative and inclusive and hence resort to extortion to stay relevant. If the BBC truly believes in their content and viewpoint, why not test it out via market forces and let the British public decide if they wish to pay for it?

In all these unsavory details, one must not ignore the BBC’s role in acting as the self-appointed guardian and propagator of British values. The channel went out of its way to patronize British citizens from the Northern part of the country for supporting Brexit and has received condemnation from politicians across both sides of the spectrum[8]. It’s silly to assume that Britain is a monolith – a multi-ethnic and multi-racial nation of 65 million people is bound to have diverse views – and for the BBC to shove down its values and leaning at the expense of public funds is plain extortion.

All nations are well within their right to project their views on the world and vie for soft power. Fox News, Russia Today, Al Jazeera, etc; all do so without masquerading under “neutrality” and “impartiality”. Fox is proud of its Christian association and Al-Jazeera does not hide its Islamic origins. Mainstream media often categorizes these channels as propaganda machines; how and why is the BBC any different? The BBC is nothing more than the British arm of the Western liberal consensus and ought to be treated as such. 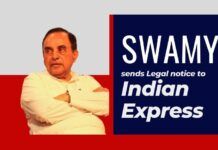 Satish K Sharma on the return of Boris Johnson, the new Labour leader Kier Starmer and a big reveal

In Data lies the truth about the GDP