The real sabotage in Bofors case started when the trial began in 2000. The corruption case came to light in 1987, and it politically finished Rajiv Gandhi though the subsequent investigation which picked up pace only in 1997 did not name him. The beneficiaries could have been his colleagues, close family acquaintances and surely the middlemen and corporate Dalals. In the first part of this series PGurus explained the sabotages from the beginning[1].

In 1997, Swedish Government submitted a box full of documents about Bofors case to India. Journalist Chitra Subramaniam, who first exposed the Swedish Radio’s revelation of 1987 was present at the function of the box handing over to Indian Ambassador by Swedish Federal Bureau of Police along with other journalists. Defence Minister George Fernandes complained several times that Prime Minister A B Vajpayee never allowed him to touch this box or any of the Bofors files. Why? Doing so would have exposed the role of Vajpayee protégé Hinduja Brothers in the Bofors kickback. Now the question is where is that box that was handed over by the Swedish Police is now? The Central Bureau of Investigation (CBI) never mentioned this box in their charge sheet filed after three years.

No longer was it possible to deny the fact of Bofors payments into the coded accounts opened by a Panama-based front spelt, variously, as M/s Mc Intyre Corporation and M/s Mac Intire Corporation, or ownership of this ‘M…’ corporation (by whatever name spelt) by the three Hinduja brothers, Srichand, Gopichand and Prakash Hinduja.

The charge-sheet filed on October 9, 2000, by the Central Bureau of Investigation (CBI) in the Delhi court of Special Judge Ajit Bharihoke, read along with the detailed post-April 1987 record of the media investigation and other documents and reports, makes two things clear.

The first irrefutable documentary basis of the Hindujas’ involvement in the Bofors-India payoff scandal came in the form of six documents relating to the Hinduja’s company – Pitco Moresco. ‘Lotus’, ‘Mont Blanc’, ‘Tulip’ accounts track of ‘commission‘ payments, amounting to nearly SEK 81 million, published and analysed in The Hindu of April 22, 1988, and June 25, 1988. Especially important were three transaction documents which made the link, “Pitco, c/o Sangam Ltd” and “Pitco, c/o Mr. G.P. Hinduja Sangam Ltd.,” for 1982 and 1984. By June 1988, the independent media investigation had acquired and published a large number of authoritative Bofors documents that proved terms like ‘winding up’, ‘no middlemen’, ‘no commission’, ‘no Indian recipient’ were lies. By late-1989, a great deal of further evidence and information, notably from the Martin Ardbo diary entries and notes for 1987 seized by the Swedish police and from The Hindu investigation’s interaction with the Hindujas, had revealed the involvement of the Hinduja Brothers as lead actors in the crisis-management and cover-up. In fact, these developments strongly indicated that the Hindujas’ role in the Bofors howitzer scandal went deeper than the role of anyone.

After a regular criminal case was registered by the CBI in 1990, this strategy of blanket denial continued, with S. P. Hinduja and G. P. Hinduja reportedly claiming to the CBI investigators, as late as 1991, that “our family has never dealt with Bofors” and S. P. Hinduja going so far as to assert, in a newspaper interview published on April 14, 1991, that “we are not an appellant before Swiss courts on the Bofors matter.” This unsavoury chapter should have come to an end with the incriminating documents received in December 1997 by India’s premier criminal investigation agency from the Swiss authorities in the execution of the letter of rogatory of February 7, 1990. But during a phase of pre-charge sheet jitters, the denial continued with new variants of the falsehood in desperate attempts to block and even derail the lawful investigation. No longer was it possible to deny the fact of Bofors payments into the coded accounts opened by a Panama-based front spelt, variously, as M/s Mc Intyre Corporation and M/s Mac Intire Corporation, or ownership of this ‘M…’ corporation (by whatever name spelt) by the three Hinduja brothers, Srichand, Gopichand and Prakash Hinduja.

The three Hinduja brothers, two of whom have become U.K. nationals and the third has reportedly acquired Swiss nationality, have defied the CBI’s summons and have, in effect, kept away from the law.

The Bofors case, as investigated by the CBI, is about criminal conspiracy, bribery, criminal misconduct by public servants, cheating, criminal breach of trust, forgery for the purpose of cheating and using as genuine a forged document in respect of the Bofors-India howitzer contract of March 24, 1986. The first charge-sheet, filed in October 2000, was against the former Defence Secretary, S. K. Bhatnagar, Ottavio Quattrocchi, Win Chadha, Martin Ardbo, M/s A. B. Bofors for various offences under the Indian Penal Code. The charge-sheet against G. P., S. P. and P. P. Hinduja alleges that they were “party to the criminal conspiracy with Martin Ardbo and others during the period 1985-1987 and thereafter and in pursuance thereof, they also received commissions from M/s AB Bofors“; that the Swedish arms manufacturer paid the three brothers, through the ‘M…’ corporation, SEK 80.80 million; that although the Government of India had laid down a requirement of no middlemen and no commissions in the howitzer deal and Bofors had agreed, “in pursuance of the criminal conspiracy, the accused persons dishonestly led the government to believe that there were no agents and induced the government to part with” an amount that included “commissions,” thus cheating the government and putting it to “a wrongful loss.”

Bofors made 9 payments to the Hindujas

The supplementary charge-sheet makes clear that in the CBI’s professional judgment, there is abundant evidence linking the “Arab-Tulip,” “Lotus,” and “Mont Blanc” coded payments (SEK 37.03 million, SEK 31.99 million and SEK 11.77 million) into three Hinduja Swiss bank accounts with the 1986 Bofors-India howitzer contract and the consequent payoffs. A CBI analysis of the nine discrete payments made by Bofors into the three coded Hinduja accounts between May and December 1986 showed that the payments were contingent on, and linked precisely to, the advance paid to Bofors by the Government of India and the payments made on account of the actual delivery of the gun systems, ammunition and so on. The evidence is absolutely clear that these were ‘commissions’ in accordance with the 3 per cent of the total contract value laid down in a Moresco-Bofors contract, as revealed to the Government of India by the Bofors officials.

The CBI charge-sheet also documents blocking manoeuvres by the three Hinduja brothers in Switzerland, undertaken to prevent the Government of India receiving the legal assistance requested under the ‘dual criminality‘ provision. It also calls attention to the significance of the change of nationality by G. P. Hinduja in June 1998 and by S. P. Hinduja in April 1999; it found a direct link between these events and “the stages of execution of the Letters Rogatory in Switzerland. The charge-sheet asserts that such conduct by the three Hinduja brothers” shows that they are also “conspirators along with M/s A. B. Bofors.” The three Hinduja brothers, two of whom have become U.K. nationals and the third has reportedly acquired Swiss nationality, have defied the CBI’s summons and have, in effect, kept away from the law. They have been unable to come to India to attend to their substantial business interests and other matters because the CBI would, without doubt, have knocked at their door and takes whatever action, under the law of the land, that is considered appropriate in the interests of its investigation.

At last, CBI buried the Bofors case in 2008 by filing closure report when Ashwani Kumar was Director, who is so close to Sonia Gandhi.

However, they have cleverly put their fourth brother Ashok Hinduja to regulate the business interest in India. The CBI has also had a ‘look-out‘ notice issued against the three Hinduja brothers which meant that had they landed in India, Immigration Department would have alerted the CBI about their arrival. Once the charges are framed by the Special Judge and the action moves decisively to a trial, it could be a new and even more worrying ball-game for the brothers from the standpoint of both personal and business interests. After the charges are framed, the CBI’s leverage in making the intransigent accused submit themselves to the law of the land will increase considerably – with summons, warrants, legal sanctions against properties and business assets, and extradition proceedings becoming theoretical possibilities – and there could be a high cost to staying away notwithstanding the influence in high political places the Hinduja brothers are reputed to enjoy. It was during UPA1 rule that Hindujas managed to kill the case in Delhi High court with the help of Gandhi family loyalist, the then Law Minister and another former Law Minister who later become an advocate of Hinduja Brothers. The Hinduja Brothers have access everywhere from Congress to BJP, to even regional parties like Samajwadi Party, to many journalists who purposely obscured their specific role and wrote only about unreachable foreign brokers.

Scribes did not look into Hindujas or AC Muthiah

In a nutshell, Indian journalists concentrated on hazy, inaccessible foreign brokers and shut their eyes to the easily traceable links of Hinduja Brothers and AC Muthaiah’s role. It was somewhat like highlighting the responsibility of unreachable U S citizen Anderson in the Union Carbide case while whitewashing the criminally negligent role of the local Indian group in the Bhopal Gas Tragedy.  And, at last, CBI buried the Bofors case in 2008 by filing closure report when Ashwani Kumar was Director, who is so close to Sonia Gandhi. He was earlier Security In-charge of Sonia Gandhi when working in Special Protection Group (SPG). In 2008 Ashwani Kumar was brought in as CBI Director by Sonia Gandhi bypassing persons shortlisted for the post and having done his job, he got from his ultimate patron Sonia the Governorship of a state as a quid pro quo after retirement from CBI.

The subsequent behaviour of successive Governments did indicate that while there is something to hide, they were not in agreement on what to hide. The Congress kept sheltering Quattrocchi and the BJP was more intent on shielding the Hinduja brothers. The two roads crisscrossed, and neither the truth prevailed nor did the law take its course. And to add insult to injury, the perpetrator has recently complained about the rotten system of India in an international magazine[2]. The middlemen have destroyed the transparency in governance and the system works according to the whims and fancies of the “dalals”.

More murky details of the hush up in Bofors case will be published on tomorrow Sunday.

[1] The Shrouded Bofors Scam – A sad tale of institutional collapse, criminal sabotage and a contrived dead end, but…? Sep 25, 2020, PGurus.com 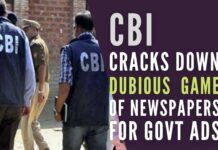 CBI cracks down on newspapers which existed only for Government advertisements 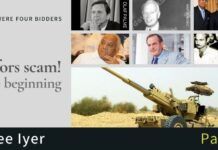 The Shrouded Bofors Scam – A sad tale of institutional collapse, criminal sabotage and a contrived dead end, but…?