A bureaucrat in Karnataka siphons off Rs.25.50 lakh temple money

Karnataka police arrested V Venkarataramana Guruprasad, Assistant Commissioner attached to the Religious Endowment department on charges of misusing Rs.25.50 lakh funds belonging to temples that come under Muzrai ministry in the limits of Bengaluru, police said on Friday. Guruprasad was arrested by the Vidhana Soudha police in Bengaluru.

The accused Venkataramana, being an Assistant Commissioner, monitored all temples which come under the Muzrai department in Bengaluru. The police explained that he had withdrawn Rs.25.50 lakh from the savings account of the Muzrai department from the Karnataka Bank branch and showed it as an expenditure and transferred all the money into his account.

V Venkarataramana Guruprasad’s illegality came to light during the auditing of last year’s Karaga festival. Notice was issued to him asking to explain the expenditure of Rs.25.50 lakh funds. The accused officer could not justify the withdrawal from the government account and deposit of the fund to his personal account.

Soon after, Bengaluru Urban district Tehsildar S R Arvind Babu had lodged a complaint in this regard.

Guruprasad had stated that Rs 15.97 lakh had been spent on the Karaga festival held between April 19 and 29 at Dharmarayaswamy temple in Bengaluru. He had not given any details of expenditure for the remaining amount. It was found that the accused had also got a 10-gram gold coin and a broken piece of gold for himself. 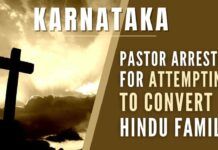