[dropcap color=”#008040″ boxed=”yes” boxed_radius=”8px” class=”” id=””]T[/dropcap]he arrest of Chhota Rajan, one of India’s most wanted gangsters, in Bali, Indonesia on a Red Corner Notice issued by Interpol is being seen as part of a plan to save him from the threat of rival mafia Dawood Ibrahim. For decades Rajan has been a “friendly asset” of the Indian intelligences agencies. There is general belief that the Rajan would be used by India to plot a major operation against Dawood who has been funding and executing terror operation from his hideout in Pakistan for several years.

In some quarters, it is also being widely speculated that Rajan’s arrest was a case of “mistaken identity”. “There is no reason why India would want to nab Rajan, which is a counter force against Dawood. I’m sure something went wrong somewhere and he was arrested under mistaken identity,” said a top officer.

Sources said the Government is making full-proof arrangement for Rajan’s safety in India. “Rajan is a valuable asset for us. The Dawood gang is after him. We are going to take all necessary measures to protect him both during his custodial interrogation and then during his judicial custody,” said a top intelligence official.

In 2000, Dawood’s gunner nearly killed Rajan in a hotel in Bangkok, but he managed to escape by breaking open the hotel’s roof. Ostensibly, Rajan’s arrest came on a tip off from Australian police, but it is widely believed that everything is eyewash and the 55-year-old gangster might have given himself in as part of an understanding to save his life from Dawood’s hit men and to help India track the Pakistan-based mafia don.

[dropcap color=”#008040″ boxed=”yes” boxed_radius=”8px” class=”” id=””]R[/dropcap]ajan was the right-hand man of Dawood till 1993 when they parted ways after differences over the Mumbai blasts. Rajan is wanted in dozens of cases of murder and abduction in India. The Interpol issued a Red Corner Notice against him in July, 1995. A joint team of Australian and Indonesian police arrested Rajan after he flew to Bali from Sydney on a passport carrying the name of Mohan Kumar. Rajan was reported to be in Australia for the last six years.

“Chhota Rajan is wanted in several cases in the state.”

Though India and Indonesia do not have a formal extradition treaty, but only last month both the countries signed a signed a pact for repatriation of each other’s wanted prisoners and cooperate in all criminal matters.

“We don’t need to have a formal extradition treaty for somebody to be extradited to another country. There are various others means and arrangements in today’s days and age…. And it has happened before,” Secretary (East) in External Affairs Ministry Anil Wadhwa said.

The CBI spokesperson said the arrest was possible due to close cooperation between India, Australia and Indonesia. “We thank Indonesia and Australia for their prompt action at our request. Further action will be taken as required under the law.”

Once Rajan arrived in India, he is likely to be handed over to CBI and then to the Mumbai police for interrogation. “Chhota Rajan is wanted in several cases in the state. So, we have decided that once he is deported and the Central Investigation agencies are done investigating him, we will request the Centre to first send him here, so that we can extract information from him in cases for which he is wanted here,” , Maharashtra Minister of State for Home Ram Shinde said. 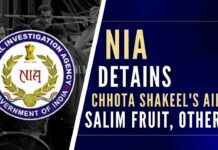