[dropcap color=”#008040″ boxed=”yes” boxed_radius=”8px” class=”” id=””]A[/dropcap] war of words between Republican and Democratic presidential frontrunners Donald Trump and Hillary Clinton has intensified over her charge that he has become a recruiting tool for ISIS.

Trump demanded an apology for Clinton’s claim at Saturday night’s Democratic debate that the real estate Trump’s rhetoric against Muslims is being used as propaganda by terrorist groups, though there is no evidence Islamic State has put him in videos.

Clinton came under heavy criticism from fact-checkers when she said at Saturday night’s debate that ISIS is “showing videos of Donald Trump insulting Islam and Muslims in order to recruit more radical jihadists.”

White House and National Security Council officials told ABC News they are unaware of any examples of ISIS including Trump in the terrorist group’s videos.

Jennifer Palmieri, Clinton’s communications director, clarified that “She’s not referring to a specific video, but he is being used in social media by ISIS as propaganda.”

Clinton’s campaign chairman, John Podesta, said about Trump in a conference call Monday: “He’s a bully, and bullies need to be stood up to, and that’s why we made the decision to go hard at his rhetoric.”

“Clinton and her Democratic challengers mentioned Trump nine times in their Saturday debate-a sign of how he has come to dominate the political conversation on both sides of the aisle,” the Wall Street Journal pointed out.

The Journal cited experts who study terrorism as saying the evidence is thin that Trump, who urged a ban on Muslims entering the US and mosque surveillance after the Paris and California attacks, has been a specific focus in terrorism recruitment and propaganda to date.

Meanwhile, President Barack Obama too jumped into the debate saying Trump was exploiting the resentment and anxieties of working-class men to boost his campaign.

Demographic changes and economic stresses, including “flat-lining” wages and incomes, have meant that “particularly blue-collar men have had a lot of trouble in this new economy,” he said in the interview with National Public Radio.

“You combine those things, and it means that there is going to be potential anger, frustration, fear – some of it justified, but just misdirected,” the president added.

“I think somebody like Mr. Trump is taking advantage of that. That’s what he’s exploiting during the course of his campaign.” 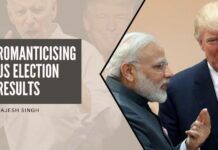 Thousands march in Gwadar for the rights of the people of...