Hours after Uttar Pradesh Chief Minister Akhilesh Yadav said his Samajwadi Party could ally with the Congress for the 2019 Lok Sabha polls if SP chief Mulayam Singh Yadav is declared the prime ministerial candidate, Congress said it had no plans of a tie-up with the party.

“As of now, Congress has no intention of a tie-up with SP,” Congress spokesperson Sushmita Dev told media persons here in response to requests for comments on Akhilesh Yadav’s remarks made at the Hindustan Times Leadership Summit here.

Akhilesh Yadav had said that Congress vice-president Rahul Gandhi was an old friend. “If they say Netaji (Mulayam Singh) will be the prime minister and Rahul Gandhi the deputy prime minister, I will say ‘yes’ to an alliance right now”,” he said.

Congress leaders from Uttar Pradesh have already said they want the party to contest the 2017 assembly polls on its own. 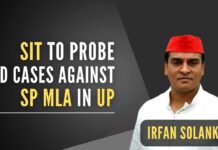 SIT to probe old cases against SP MLA in UP; flags 4 complaints out of 13 as ‘serious’

Mamata rattled because her prime ministerial ambition is under threat by...