Conman Sukesh Chandrasekhar has penned another letter to Delhi Lieutenant Governor V K Saxena stating that he and his wife were receiving death threats from AAP over his allegations. According to Sukesh, he was receiving constant threats in prison to withdraw his complaint against AAP leaders such as incarcerated Minister Satyendar Jain and Kejriwal.

He requested that both of them should be transferred to jails in Haryana, Uttar Pradesh, or Uttarakhand as the Tihar and Mandoli jails come under the jurisdiction of the Arvind Kejriwal-led government.

The letter read, “As now the investigation will begin and I hold very important evidences against them, and they are very well aware of it and will go to any extent to cause harm to me and my wife Leena Paulose who is lodged in Jail no.16. From last 24 hours, the jail superintendent and other officials are putting immense pressure on me and harassing me. Apart from this, Satyendar Jain is sending me offers for compromise, which I fail to accept me and my wife will be tortured to death.”

“Sir, it is very important that I be safe and my wife is safe during the course of the investigation of Jain and Kejriwal. Mysterious deaths have been very common in Delhi Jail for eg. Ankit Gujjar. As my matter involves the Chief Minister and the Home/ Health/ Jail Minister, I and my wife are completely not safe in the hands of Delhi jail till the investigation is completed and all the mentioned persons will be arrested and brought to justice,” the conman added.

After Sukesh’s first letter went public, he alleged in another letter written to Delhi L-G that he had been receiving severe threats from the jail administration on behalf of AAP’s jailed leader Satyendra Jain and Director General prison Sandeep Goel.

Sukesh even requested Delhi Lieutenant Governor, Vinai Kumar Saxena, to order a CBI probe urgently claiming that the truth will expose AAP National Convenor Arvind Kejriwal and Satyendra Jain. He even claimed that he would submit every single detail of all the meetings, interactions, number of cash deliveries, and locations if a probe was initiated. 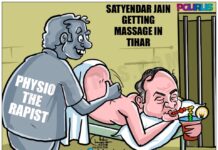