India’s aviation regulator, the Directorate General of Civil Aviation (DGCA) issued a show-cause notice on Wednesday to SpiceJet after its planes reported eight over the past 18 days. The airline CMD Ajay Singh said a lot of these incidents are “minor” in nature but assured the carrier will be “doubly careful” and strengthen aircraft inspection.

In its notice to SpiceJet, the Directorate General of Civil Aviation (DGCA) said the airline has failed to “establish safe, efficient and reliable air services” under the terms of Rule 134 and Schedule XI of the Aircraft Rules, 1937. “The review (of the incidents) transpires that poor internal safety oversight and inadequate maintenance actions (as most of the incidents were related to either component failure or system-related failure) have resulted in degradation of the safety margins,” said the show-cause notice by the regulator.

The DGCA has given the airline three weeks to respond to the notice. “Financial assessment carried out by DGCA in September 2021 has also revealed that the airline is operating on ‘cash-and-carry’ (model) and suppliers/ approved vendors are not being paid on a regular basis, leading to a shortage of spares and frequent invoking of MELs (minimum equipment lists),” said the notice.

“This is an audit that they are referring to from last year (September 2021) that they had done. The aviation sector has been under a great deal of (financial) stress. That does not mean that there can be any compromise on safety,” said Ajay Singh to the media. “All vendors that are relevant to anything related to safety or spare parts are always paid or settlements are reached with them. There is no failure here,” he added.

However, it is a well-known fact that SpiceJet is facing a series of financial issues and an insolvency case pending before the tribunal. SpiceJet is a politically exposed firm. Started during the BJP-led NDA regime in 2002 by Ajay Singh, who was then a close aide of Minister late Pramod Mahajan. But when the UPA regime came to power in 2004, soon SpiceJet was acquired by DMK’s Maran family. Interestingly, the Spicejet again came back to Ajay Singh when BJP came back to power in mid-2014.

SpiceJet’s transfer back to Ajay Singh in mid-2014 was a controversial move as the company was listed on Stock Exchanges. Without informing the Exchange, how shares were transferred to Ajay Singh by the Maran family is still an unanswered question. Later Maran family and Ajay Singh engaged in a legal battle for pending payments and it was revealed that the sale deal was just Rs.2 as a token value on a condition that Ajay Singh will take over the total dues during the management of the Maran family.

When asked what changes SpiceJet will now undertake to deal with the safety concerns, Ajay Singh said, “We have to be doubly careful. We will rigorously inspect aircraft when they leave for a flight, which we already do, but we will strengthen the inspection.” Reacting to the DGCA notice, Civil Aviation Minister Jyotiraditya Scindia asserted that passenger safety is paramount. “Even the smallest error hindering safety will be thoroughly investigated and course-corrected,” the Minister said in a tweet. 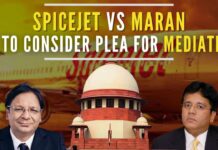