There is, and will always be, stratification along with various criterion in each society, but religion does not have to be a party to them.

Motor neurons control gripping, walking, speaking, swallowing, breathing; that is, all the body movements. They are basically communication channels carrying messages back and forth between the brain and various limbs of the body. When they stop doing this, communication breaks down, and even otherwise healthy limbs just waste away, not knowing what to do.

Various Hindu Castes were various limbs of society. At some time when our destiny took a turn for the worse, Castes stopped communicating with each other.

Our Caste Egos are too big, so big that they have blinded us to the fact that we are being swallowed, limb by limb.

There is no dialogue among Hindus across Caste lines. There are some Caste Panchayats, but they strictly address the Caste they belong to. In fact, many Castes have sub-castes, and even the sub-Castes do not communicate among themselves.

And therefore, even healthy limbs are just withering away. Some are flailing around but without any coordination.

Our Caste Egos are too big, so big that they have blinded us to the fact that we are being swallowed, limb by limb.

They say that Dinosaurs in their last days had their nervous systems so damaged that an injury in the leg or tail used to take hours to register on the mind. In our case, they have not registered even in centuries.

The lion is a majestic animal. But, had there been no Hindus, it would have by now disappeared from Gir also. Once it was everywhere on the Indian sub-continent.

Why is the most fearless and courageous animal, lion, on the verge of extinction? Because it is not evolving. Its environment is changing, but it is not able to change to the changing environment. Because it is an animal. It can not think.

Will we fare better than animals? Will we be able to get down from our high horse of Caste stratification and start talking to each other?

The most critical point that was overlooked was that people can be educated to behave differently from what made them keep apart. That is why universal education at all times was so critical. We are still not ready to do this, to rectify the mistake.

Well, if we will not educate ourselves, somebody else will do, Caste by Caste. And he may, in fact, teach stories which will make the communication among Castes impossible, instead of enabling it.

And no, justifying vertical Caste stratification (or Varna, or whatever you call it) as the starting point of dialogue will not open the communication. There is, and will always be, stratification along with various criterion in each society, but religion does not have to be a party to them, what to say of mandating them. Will we be able to grasp this simple fact? Will Dharma be able to evolve? 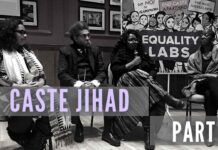 The Caste-Jihad: From the ancient to the present – Part 6

4 SC Judges: Missed The Woods For The Trees?