Asian Americans are fighting the race-conscious admission practices in Harvard University and other Elite schools. Nearly 1000 enthusiastic supporters gathered at Copley Square, Boston, MA on October 14th cheering the speakers. It was a historic moment for Asian American communities. Asian American Coalition for Education (AACE) President opened the rally speech “Like many others, Asian Americans came to the U.S. to pursue the freedom, rule of the laws and especially the American Dream”. Manga Anantatmula a Hindu Activist, representative of American Hindus is one of the directors of AACE and organizers of the Rally, expressed that her support and fight for the cause will only intensify. Manga Anantatmula extended an invitation to Sen. Warren and Dr. Shiva Ayyadurai, US Senate candidates from MA, to speak at the Rally to express their views on the Harvard discrimination against Asian Americans. Dr. Shiva accepted the invitation and made an electrifying speech. He extended his full support to SFFA and AACE cause. Jacob Verry, a 22 year old said “Skin colour is not a substitute for your life story” to which the crowds cheered and applauded most. A moment, all supporters connected instantaneously! Another speaker Vijay Jojo Ingram, an Indian American, who did a social experiment claiming to be a black to get into medical school advised the Asian communities to never reveal their race in their applications. That only puts you in a disadvantage, he said. Although it was a cheering moment in the crowd, it was also a sad and disheartening moment. The rude reality was staring at us.

For Asian Americans, Equal education right in an indispensable part of the American Dream! Students for Fair Admissions (SFFA), the organization that is Plaintiff in the lawsuit against Harvard University discrimination, revealed that an Asian-American applicant with a 25% chance of admission would see his odds rising to 35% if he were white, 75% if he were Hispanic, and 95% if he were African-American. In addition, Asian-American applicants have the lowest admission rate across all academic brackets. SFFA is the Plaintiff in the lawsuit against Harvard University discrimination representing the Asian American students.

The trial against Harvard discrimination started last week. The Harvard University Dean testified that the school had different SAT score standards for prospective students based on factors such as race and sex. The internal emails reveal Harvard favors “Z-List or Dean’s favorite list” applicants who cannot fulfill or gain admission in the fair process, for consideration of a fund. Trial reveals that an unidentified family donated $8.7millons. The donors are ranked as “1” and “2” to determine the preferential of the applicants.

In the coming weeks, the trial will unfold the untold story of Harvard discrimination. It is just the tip of the Iceberg. We have a long battle ahead of us. We Asian Americans need to be put on the same platform as others. We cannot be regionalized for identity. It’s discrimination in itself. If a European is called “White American”, then the “Asian” must drop from our identity. We want to be Americans. It’s as plain and simple as that.

Manga Anantatmula
Manga Anantatmula a Hindu activist, serving as a Senior Advisor for Political Outreach for (American Hindu Coalition) AHC, which represents five million American Hindus in the US.
She serves as a (Board of Director) BoD for Asian American Coalition for Education fighting for Equal Education in K-12 and discrimination against Asian students in the admissions of Ivy League Schools in the US to establish “race-neutral” admissions. She is also the Director of Outreach, Infinity Foundation. 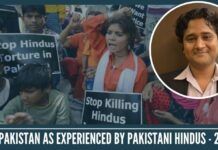 Pakistan as experienced by Pakistani Hindus: 71 years of ‘democracy and equality as enunciated by Islam’ – Part 2 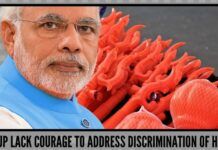 Does BJP lack courage to address discrimination of Hindus?

Antecedents of Aligarh Muslim University and why it deserves to shut...