Here’s Mukesh Meghwar, a Pakistani Hindu youth who works for minority rights, talking about the life of Hindus in Pakistan.

This is the English translation of Mukesh Meghwar’s Urdu article published in Pakistani online magazine HumSub.com.pk on 29 September 2018.

The original article has some references to historical figures and events, which have been briefly explained in brackets in this translation.

At the bottom of this article, two comments have been given. These were posted by the readers of the original article in Urdu.

Mukesh (30) is a minority rights activist of Pakistan who has been particularly active in highlighting the discrimination and injustice faced by the Hindu communities of Sindh.

I am made to feel over and over again as if I am some creature other than a normal human being – as if it’s crime to be a Hindu. 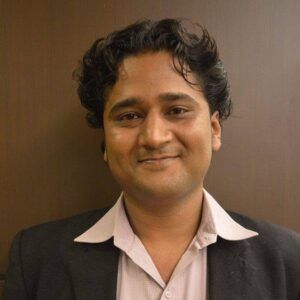 He was born in a small village called Kapri Mori in Badin district of Sindh in a Scheduled Caste (Dalit) family whose occupation has been shoe-making.

A law graduate, Mukesh is the first in his family to have obtained higher education.

US think-tank Atlantic Council selected Mukesh as one of the 15 civil society activists under its Emerging Leaders of Pakistan Fellowship Program for 2014.

Is it a crime to be a Hindu?

I do not want my life in this country to be associated with a particular religious identity or wish to be tagged to a mere religious affiliation. I wish to be viewed and treated as a citizen with rights equal to those of other citizens.

Whenever someone is despised on the basis of his or her religion, I feel as if I am the victim.

I get this treatment only because the majority here thinks I am not one of them –that they are ‘Muslim’ and I am a ‘Hindu’, that they are destined for Jannat (Islamic paradise) and I am doomed to be in Jahannum (Islamic hell).

They think that this land and this country belong only to them, not to me; I have somehow been dropped amidst them from some other planet.

They believe that being a ‘Hindu’ means being an ‘Indian’ – and being a ‘Muslim’ means being a ‘Pakistani’ even if a Pakistani Muslim then styles himself or herself as a ‘Ludhianvi’ or ‘Gurdaspuri’ or ‘Dehlavi’ or ‘Jaipuri’!

Should that be the yardstick for assessing one’s loyalty to one’s country?

How is anyone going to get these people – who reduce me to a mere ‘Hindu’ identity and brand me an enemy of Pakistan and Islam – to understand that I am son of the soil; I have been a native much before Partition took place; I was born on this land and patriotism is part of my being.

My brother! My forefathers gave their blood to this land; we too sacrificed our lives for this country, and we too have been killed by our own (during Partition) from Lahore to Larkana, from Lyallpur to Lakshmi Chowk.

From Bhagat Singh to Hemu Kalani, from Rooplo Kolhi to Raja Dahir, our blood also gave its hue to the soil of this country.

(Hemu Kalani was a Sindh-born freedom fighter who was hanged by the British in 1943. Rooplo Kolhi was a 19th-century revolutionary who fought against the British and was executed in 1858. Raja Dahir was the seventh-century monarch of Sindh who died while fighting off the very first Islamic invasion of India mounted by Muhammad bin Qasim of Umayyad Dynasty.)

So how on earth was I deemed any less patriotic than you? Why has my identity, loyalty, and patriotism been called into question?

‘We were first to make the sacrifice
To defend our land and pay the price.
Yet here’s this claim that people make
This country is for their not our sake’

I am the fourth Khalifa of the Qalandar that is so beloved of you. I am buried beside Bhittai whom you revere. I am the Odero Lal that we both visit to pay our respects. I am the follower of Bulleh Shah whom we both honor. And you are not the only one who prays at Azan; I pray to the same God.

(Lal Shahbaz Qalandar was a Sufi saint of the 12th century whose shrine, Sehwan Sharif, is located in Jamshoro district of Sindh; it’s said that the fourth Khalifa or spiritual inheritor of Qalandar was a Hindu. Shah Abdul Latif Bhittai was a 17th century Sufi whose poetic compendium, Shah Jo Risalo, is considered a treasure trove of Sindhi language; Bhittai’s Hindu companion Madan is believed to be buried with him at his shrine in Matiari district of Sindh. Odero Lal was a saint whose shrine in Sindh attracts both Hindu and Muslim devotees. Bulleh Shah was a Punjabi Sufi poet of the 18th century.)

I have always heard my mother pray: ‘O God, ensure the well-being of the children of Hindu and Musalman; by virtue of that keep my children too in your protection’. She taught me not to eat in the presence of a Muslim fasting in the month of Ramadan lest God be displeased.

And a Muslim auntie in my neighbourhood would often sing: ‘Tu Hindu banega na Musalman banega, Insan ki aulad hai Insan banega’ (‘You would become neither a Hindu nor a Muslim; being the child of a human being, you’d rather be a human being’).

Is your blood red and mine white? Is it written on our foreheads that we are ‘Hindu’ or a ‘Muslim’? What is the difference in the structure of our bodies?

If at all there is a difference between us, it’s that of the mindset.

Pray, tell me how are you separate from me and I from you? How can you live in peace after setting my house on fire? Our emotions are the same; the same blood runs in our veins; our land, our sky, our God, our language, the lullabies that our mothers sing to us, the color of our skin, our country, our civilization, our culture, everything is the same.

I am made to feel over and over again as if I am some creature other than a normal human being – as if it’s crime to be a Hindu.

‘God was divided by the temple, mosque, and church
As was land and the sea; let the humanity be spared.’

We continue to feel ashamed because there are people among us who put on many masks and are striking at the roots of this country.

Mukesh Meghwar’s article in Urdu elicited a number of interesting comments from readers on HumSub.com.pk website. Two of those comments are being given here because they provide a very valuable insight into how Pakistanis view the deeply problematic character of their country and what it has done to their ‘Hindu’ and other non-Muslim citizens.

The first of the two comments being given here is posted by one ‘Alia Jamshed Khakvani’ (a female name). The second is a response to the first from one ‘Shakeel Chaudhary’. Both comments are in Urdu. The following is their English translation.

Alia Jamshed Khakvani: It would have been great if this site had also discussed the atrocities being committed against Kashmiris: how many of them have been killed and maimed and how many continue to die. If justice is to be provided to human beings, then India’s conduct will have to be taken into account. Why should only Pakistan be made to feel ashamed?

Are Indian Muslims able to live as peacefully as the Hindu communities of Pakistan? Even then we find ourselves feeling ashamed. It’s because we are not defending our country unitedly. We have bad pennies among us. We are despised because we are Muslim, even though our religion is unrivaled in preaching respect for humanity.

We continue to feel ashamed because there are people among us who put on many masks and are striking at the roots of this country.

Shakeel Chaudhary: You have a strange argument. Should we overlook the atrocities being committed against the minorities of Pakistan because we don’t like India’s conduct?

How do the happenings in Kashmir justify the atrocities committed against the minorities in Pakistan?

You ask, ‘Are Indian Muslims able to live as peacefully as the Hindu communities of Pakistan?’

Well, Mukesh Meghwar’s article gives us a good idea as to how peacefully Hindu communities have been living in Pakistan. If you need a better idea, read the resignation letter of Pakistan’s first law minister Jogendra Nath Mandal, who had quit in 1950 after a massacre of 10,000 Hindus in East Pakistan.

By the way, could you explain how the ‘two-nation theory’ allows Muslims to even live in India?

Didn’t a great majority of those Muslims actually support the ‘two-nation theory’?

Why should they all not be shifted to Pakistan?

You write that ‘we find ourselves feeling ashamed because we are not defending our country unitedly’.

What do you mean by that?

Do you mean the kind of defense that you have made in your comment?

You say, ‘We have bad pennies among us.’

You also say, ‘We are despised because we are Muslim, even though our religion is unrivaled in preaching respect for humanity. We continue to feel ashamed because there are people among us who put on many masks and are striking at the roots of this country.’

Who are these people who put on many masks and what have they got to do with this article?

As far as ‘respect for humanity’ is concerned, do provide some evidence of your claim.

Do all the people of Pakistan have equal rights? Why have non-Muslims been disqualified from holding the top two posts (president and prime minister)? Has it been done for the ‘respect for humanity’?

Were Osama bin Laden’s deeds meant to respect humanity? How did he come to be the hero of so many Muslims?

If you don’t mind, do tell us what you think about hijab and photography. Does Islam allow a woman to publish her photograph in a newspaper or on Facebook?

(On HumSub.com.pk, which published Mukesh Meghwar’s article, the readers can post their comments only through Facebook login. Alia Jamshed Khakvani’s comment has been posted along with her photo.)

This article has the following 11 Web-links embedded in the text in the order of their occurrence.