Presentation can be read below 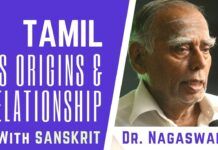 Dr. Nagaswamy discusses the relationship between Tamil and Sanskrit with facts