All the accused, arrested on Tuesday, were presented before court after expiry of the four day police custody. ED’s public prosecutor N.K. Matta sought custody saying that the beneficiary of forex transactions has to be identified.

[dropcap color=”#008040″ boxed=”yes” boxed_radius=”8px” class=”” id=””]T[/dropcap]he case pertains to the transfer of Rs.6,172 crore in foreign exchange through a Bank of Baroda branch to Hong Kong. The money was transferred through 59 bank accounts to companies in Hong Kong and Dubai for fake import and export businesses. 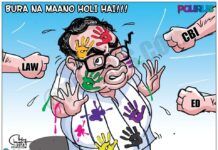