[dropcap color=”#008040″ boxed=”yes” boxed_radius=”8px” class=”” id=””]A[/dropcap] Scorpio jeep screeched to stop in front of a wayside pharmacy on the Chennai-Pondicherry highway. A teenage girl in jeans and T-shirt dashed to the counter of the shop, impolitely demanded the middle-aged man at the counter, “Sir do you have condoms, and what brands? It sounded like she was asking for cosmetics! The man, a bit embarrassed, eyeing at me sipping a cup in the adjacent teashop, readily displayed the triangle symbol packets. She picked one, paid and ran up to the waiting Scorpio, blasting rock music with a few boys and girls, and resumed their sojourn.

Sex and sexuality is a big draw for the media, instigating or sensationalizing or exploiting the base instinct of the human beings…

It was a rude shock to me, eyebrows raised, as I looked at the pharmacy counter man, who peevishly smiled at me; I don’t know what he meant by that.
The situation is very alarming; Radhika Santhanam’s article in The Hindu Sunday magazine “Marriage, morality & more” is shocking, at least to me or may be more people like me steeped in the sanctity of marriage and morality. “Adultery has been made easier by cell phones and the internet”, mentions the article. Adding to that the birth control pills and condoms invented for the sake of population control which have been misused for immoral activities among men and women and the young and vulnerable people are lured by the sale promotion of such products.
[dropcap color=”#008040″ boxed=”yes” boxed_radius=”8px” class=”” id=””]W[/dropcap]here are we heading? Into the realm of an immoral, value less society. Ministry of Culture is debating on the resurrection of cultural values and revamping education system. Ministry has called for suggestions, National electronic media is having discussions and debates on the meaning of Indian culture and western culture or colonial moorings that continue to haunt our lives.

Why not imbibe the good things instead of the immoral behavior of the other’s culture?

The young generation is carefree about everything around their life, come what may! Is the attitude displayed because of affluence both at home and individual earnings? Some parents grumble, unhappy about their offspring’s indifference to disciplined life, especially the liberated girls leading a loose life. Can we blame the western system of culture or education for our eroding values? No, certainly not! Why not imbibe the good things instead of the immoral behavior of the other’s culture?
Sex and sexuality is a big draw for the media, instigating or sensationalizing or exploiting the base instinct of the human beings – both male and female and ‘hey while the sun shines’ is the business approach to make everything a profit making industry.
[dropcap color=”#008040″ boxed=”yes” boxed_radius=”8px” class=”” id=””]T[/dropcap]he reason for this chaotic situation may be attributed to the modern belief that the scientific advancements are for materialistic gains, thus separating science from spirituality. Science and spiritually are two sides of the same coin as far as Bhaarateeya Samskriti or Sanaathana Dharma is concerned. Suffice to say, an art integrated, culture oriented education system could, to a certain extend correct the wrong path our coming generation is treading on.
Jai Bhaarat! God save our country!! 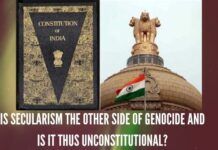 Is secularism the other side of genocide and is it thus unconstitutional?

Is the Government putting hurdles in the way of Ayurvedic Hospitals?