His Excellency the President of India

We have to approach and seek your kind intervention in a very important issue that has a bearing on the National Security as well as security of the Prime Minister of India but also security of each individual law abiding citizen of the Country. That relates to recent repeated  judicial intervention at the behest of certain forces inimical to the interest of the country. This relates to grant of protection from arrest to several persons against whom the investigating agencies have meticulously collected evidence about a conspiracy to assassinate the Prime Minister of the Country.

Antecedents of the conspirators

Anti-India Forces behind this conspiracy

From the above cases we believe that there is adequate grounds for citizens of this country, to reasonably believe that many of the judicial authorities at several courts including the Supreme Court of India, have been compromised and are prosecuting the agenda of ISI and other forces inimical to the interest of this country. 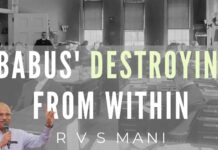 Does AAP Have A Future?