A series on Ramesh Abhishek and the regulatory abuse that he indulged in regard to the National Spot Exchange Limited (NSEL) that PGurus published[1] (March 9-27,2019) got a response from a loyal journalist[2]. The article published in the ‘Prime’ edition of leading financial newspaper is from the one who showed allegiance to the likes of Ramesh Abhishek from the very beginning in this one-sided war of all agencies against Financial Technologies (India) Limited (FTIL).

The merit of any argument lies in the facts. PGurus takes up public causes that are of national interest and in this process checks various aspects in detail before going with any story. Instead of whitewashing and citing credentials from sources of dispute, can Ramesh Abhishek answer a few questions, if he is so convinced and committed to pursuing the truth as he claims?

A problem that could have been solved in the first few weeks by swift action on brokers and defaulters, but you chose to make it into a complex one that remained unsolved even after five years.

After reading the defense of you put up by your loyal journalist, I tried to search about major upheavals in the financial markets across the world to look for an instance, where a regulatory authority has completely destroyed a budding market segment and distorted the interpretation of a contract to demolish a fast growing financial infrastructure group. A problem that could have been solved in the first few weeks by swift action on brokers and defaulters, but you chose to make it into a complex one that remained unsolved even after five years.  I could not find such an instance.

For this feat of gross regulatory abuse and mismanagement added with liberal doses of dishonesty and duplicity, you will surely stand out.

[2] Ramesh Abhishek, who got India a boost in Ease of Doing Business, has been put in the dock. Here’s why the charges are untenable – Apr 8, 2019, ETPrime 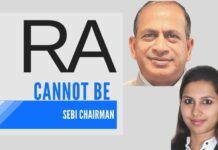